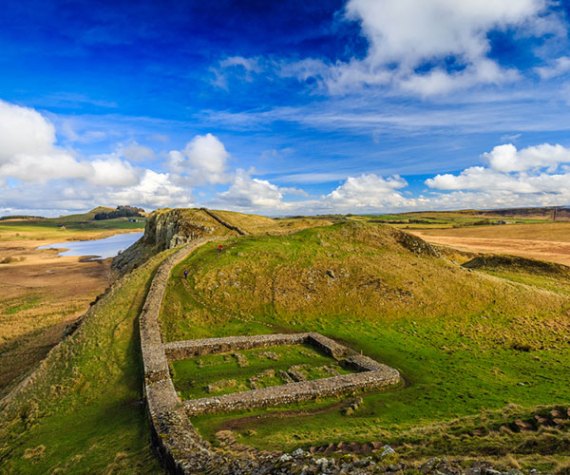 On the 13th of September 122 AD building began on Hadrian’s Wall.  This was a massive feat of military engineering, stretching from coast to coast across northern Britain. The project by Emperor Hadrian aimed to halt the expansion of the Roman Empire and consolidate his holdings in the north.

Our Blue Badge Guide Laura Rhodes has been running private guided tours of Hadrian’s Wall and surrounding areas for over 10 years. She tells us about the history of this World Heritage site and some of the things we should be thanking the Romans for today. 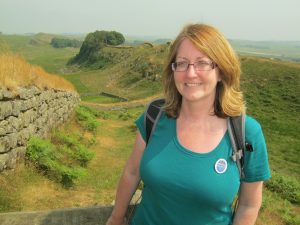 “Hadrian’s biographer said that the wall was built ‘to separate the Romans from barbarians’. A popular misconception was that it was built to keep out the Scots because this was long before Scotland existed! Along the wall were a network of forts and milecastle housing thousands of soldiers – military men and peacekeepers.

The first Roman invasion of Britain was by Julius Caesar in 55 BC and Roman rule had been firmly established in Britain by the time Hadrian arrived. The Roman conquest of Britain was a gradual process and everybody knows about the famous Roman roads which criss-cross the country.  We are still using some of the routes established by the Romans almost two centuries ago.

But what else did the Romans do for us?

It’s not just roads we have the Romans to thank for. There are many other things we take for granted today that were first introduced by the Romans.

The aqueducts supplying water to Hadrian’s Wall have not been excavated, but the sanitation arrangements are well known.  At Housesteads fort, the highest and most isolated of the Roman Wall forts, the military latrines were sited at the lowest  point in the fort, using water held in vast lead lined tanks, the remains of which can still be seen today. Close by is Vindolanda, where the famous Tablets were discovered. A recent artefact now on display is a unique roman wooden toilet seat! Chesters fort also has the best preserved military bath house in Britain and it’s easy to imagine the soldiers sitting there bathing and chatting after a hard day’s work. Not much privacy in those days! 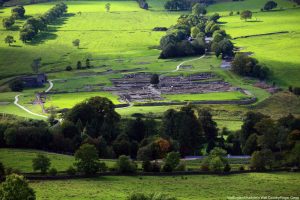 This was another development brought to these shores by the Romans. The underfloor heating network in the Commanding Officer’s house at Chesters even extended to the dining room. The soldiers themselves lived in much less luxurious surroundings and reconstructions of both can be seen at Arbeia, a supply fort in South Shields. This was an important storage and supply facility to distribute food to the soldiers in the wall forts.

Various new foods were first brought to Britain during Roman times including onions, peas, apples, grapes and cherries. A local ice cream firm has a range of Roman inspired flavours including apple and cinnamon and heather honey ice cream.  Wine was also a poplar introduction. There may have been cultivation terraces on Hadrian’s Wall but it is more likely that most wine was brought in by sea to the port at Arbeia.

Roman medicine was based on prevention rather than cure, so public baths and sanitation were very important. The use of herbal remedies became widespread, and the garden at Arbeia grows some of the plants used in healing. Although there were no real anaesthetics, surgical procedures were carried out in the military hospital at Housesteads– perhaps that was another use for wine?

We also have the Romans to thank for the introduction of currency, a new calendar, education, and law and order. 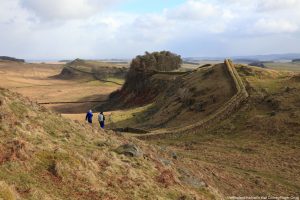 Looking eastwards along the Whin Sill and Hadrian’s Wall, at Housesteads Crags (VisitBritain)

When walking along this World Heritage site parts of the area now feel so remote and windswept that it’s hard to imagine that this was once a thriving military area with thousands of soldiers living in the forts, and village settlements alongside, housing the women and children and providing shops and entertainment.

Now there is a National Trail along the length of the wall and it has become a popular visitor destination.  There is a great choice of accommodation, much more luxurious than the earlier barracks, and many lovely pubs and cafes in the Heart of Hadrian’s Wall area.”

Laura offers guided tours for groups and individuals along Hadrian’s Wall with site and museum visits, and has worked with university and school groups providing educational tours. Come along on one and discover what else the Romans did for us.