What links a medieval church in the City of London and the author of Paradise Lost with the composer of the chilling soundtrack to Psycho? To learn the answer, read on…..

The first parish church of St.Giles without Cripplegate traces it`s history back over 1000 years but what we now see is largely the result of work carried out in 16th Century. The unusual name refers to the fact that it stood just beyond the City wall of London, adjacent to the ‘Cripplegate’, one of seven gateways into the medieval City. St.Giles was seriously damaged during the Blitz of 1940-41 and the surrounding area, known as the ‘Barbican’, utterly devastated. Post-war rebuilding of the area has resulted in a striking example of ‘Brutalist’ architecture. The Barbican Centre, a mix of apartments and an arts centre, the latter including a concert hall, home of the London Symphony Orchestra and the Guildhall School of Music and Drama. St.Giles itself was fully restored to its former glory and forms a striking juxtaposition with its immediate surrounds. Aesthetic interest aside, what is even more remarkable is the roll call of famous historic figures with whom St.Giles has connections. 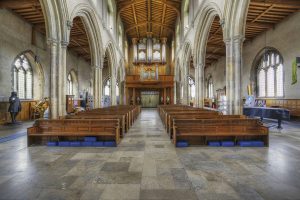 In 1478 the parents of Sir Thomas More, future Chancellor to Henry VIII and author of Utopia were married at St.Giles. Oliver Cromwell, later to become ‘Lord Protector’ of the English Republic, was married here in 1620. John Milton, de facto poet to the Republic and author of Paradise Lost, was buried here in 1674. A century later a parish official saw fit to open his tomb and observed his remains to be in remarkably good condition. Not for long though, the enterprising official charged a fee for viewing and soon teeth, a rib and handfuls of hair were removed by acquisitive souvenir hunters! John Bunyan, author of Pilgrim`s Progress and Daniel Defoe, who wrote Robinson Crusoe, were both at one time parishioners.

At the start of the 17th Century, an aspiring actor called Edmund Shakespeare fathered a child, Edward, who was baptised at St.Giles. Edmund’s older brother, William Shakespeare, lived nearby and it seems likely that he would have spared time from writing some of his greatest plays of this period, like Macbeth and King Lear, to attend his nephew’s baptism. It is entirely possible too, that he would have encountered the Church organist, one of the leading English composers of the period, Thomas Morley.  Much of Morley`s life is shrouded in mystery, like another figure in the art world of the time, Christopher Marlowe, he may have worked as a government spy, but what is certain is that Morley composed one of the first settings of Shakespeare’s words, ‘It was a lover and his lass’, from As you Like It. Famed as a madrigal composer himself, in 1601, Morley published a collection of madrigals by Elizabethan composers, himself included, ‘The Triumphs of Oriana‘, said to be in honour of Queen Elizabeth 1st. 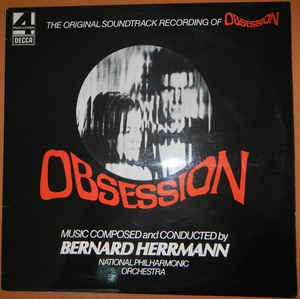 ‘Obsession’ was recorded at the church in the 197s

Fast forward to 1961, another musician, the veteran American composer Bernard Herrmann relocated from Los Angeles to London. A graduate of the Julliard School of Music in New York, Herrmann had a successful career as conductor and composer but is now best remembered as the go to composer of scores for Hollywood thrillers and suspense movies. He worked alongside directors such as Alfred Hitchcock, Francois Truffaut and Martin Scorsese, had it not been for his death in December 1975, would have produced scores for Stephen Spielberg. The list of film credits is long, Citizen Kane, Fahrenheit 451, Vertigo, Psycho amongst them. St.Giles Church is noted for its fine acoustic, something which drew Herrmann to the Church as a recording studio. It was here that his last three film scores were recorded in the 1970s. It’s Alive, Taxi Driver and Obsession, the latter making use of the Church organ, alongside a full orchestra and choir to achieve the desired unsettling effect. The story goes that as Herrmann prepared to conduct the recording session, he turned to the film editor and said, ‘John Milton is buried at St.Giles about six feet from where I conduct. If I do a good job, he’ll whisper to me‘.

Greg Laing is a Blue Badge Guide working in London and the surrounding area.