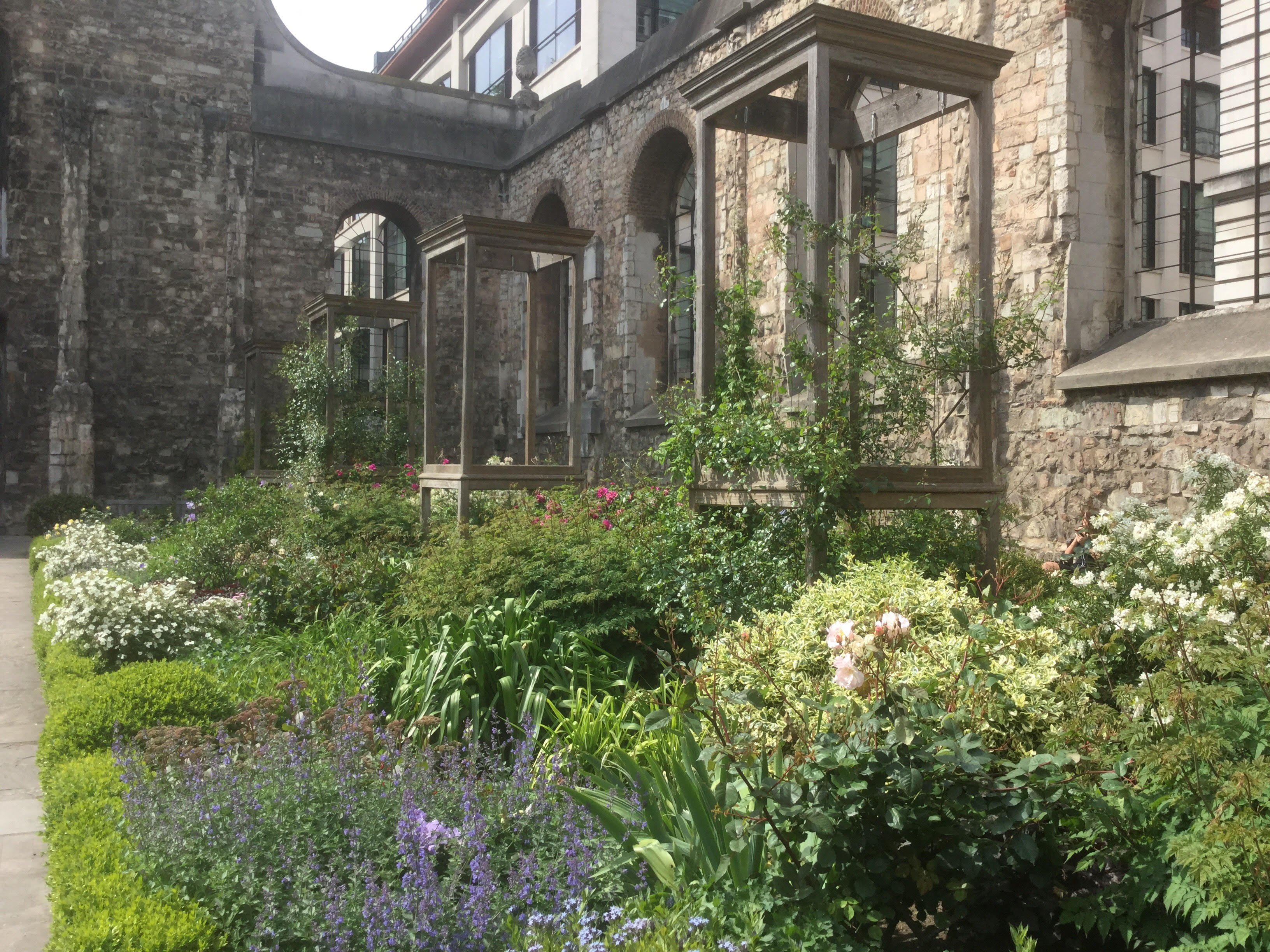 The City of London is a small district at the heart of the capital. Sometimes called the Square Mile, it is perhaps best known today as one of the world’s leading business centres. But if you look carefully, hidden amongst this concrete jungle is a maze-like array of secret gardens, church-yards and plazas. There are over 200 green spaces in total, each one unique and with its own story to tell. They not only provide vital habitat for wildlife, helping to encourage biodiversity but are also an essential resource for the City’s 8,000 residents and 330,000 workers and visitors.

Blue Badge Guide Alice Trickey takes us away from the hustle and bustle of the City to show us her top five green spaces to explore, all just a short walk from St Paul’s Cathedral.

Christchurch Greyfriars
“Established in 1225, Christchurch Greyfriars was once the second biggest church in the City of London after St Paul’s Cathedral. Four queens were buried here, including Queen Isabella, wife of Edward II, nicknamed ‘the She-Wolf of France’ on account of her plots against her husband. Destroyed in the Great Fire of 1666, the church was rebuilt by Sir Christopher Wren, completed in 1704. If you look up at the surviving walls, you’ll see large carved pineapples in the corners; a new and exotic fruit at the time and a symbol of welcome.

In December 1940, during one of World War II’s fiercest air raids on London, an incendiary bomb struck the roof and tore into the nave. Much of the church was destroyed. Laid out within the ruined outer walls, the garden reflects the floor plan of this lost building. There are box-edged flower beds representing the original position of the pews. In the middle of these flower beds are 10 tall wooden towers, with clematis and climbing roses weaving their way up. These represent the position of the pillars that once supported the roof. The church tower did survive and is now an 11 storey, 3 bedroom home for one lucky Londoner! 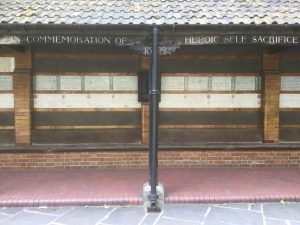 Postman’s Park
The second largest park in the City of London, Postman’s Park gets its name from the fact it was once a popular lunch spot for postal workers (it’s close to the old General Post Office). Laid out as a public garden in 1880, it was formed from the churchyard of St Botolph, Aldersgate. St Botolph was the Anglo-Saxon patron saint of travellers and churches dedicated to him were often located at city gates. As the name suggests, the nearby Aldersgate Street marks the site of one of the gates in the ancient London wall around the City.

As you walk through Postman’s Park, you’ll find the G F Watts Memorial to Heroic Self Sacrifice. Created by the artist and philanthropist George Frederick Watts in 1900, this extraordinary monument commemorates the heroic deeds of ordinary men and women who lost their lives to save others. Beneath a 50-foot long timber shelter are 53 glazed plaques, 13 designed by Watts. Each one tells a story of tragedy and is testament to the incredible courage of ordinary Londoners. 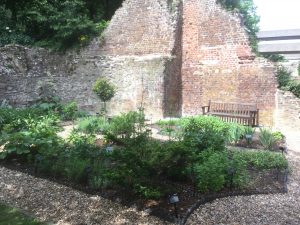 Barber Surgeons’ Garden
There’s been a garden on this spot since at least 1555. The present garden was begun in 1987, set within the remains of a bastion of London’s Roman fort (dating from around 300 AD).

It was created by the Worshipful Company of Barber Surgeons, one of the City’s livery companies, whose hall stood near here. Barber Surgeons were medical practitioners in medieval Europe who, unlike many doctors of the time, performed surgery. The red and white pole, which is still used to identify a barber’s shop, was originally intended to reflect the blood and napkins used to clean up during bloodletting. This treatment was one of the main tasks of the barber surgeon, as well as extracting teeth, performing surgery and cutting hair.

The plants here demonstrate the many ways plants have been used from the earliest times to the present day in the practice of medicine and surgery. There are 45 different species of herbs grown here, used to treat everything including wounds, bruises and burns. Many of the plants are important to modern-day medicine. See if you can spot the Pacific Yew tree from which the chemotherapy drug taxol, used in breast, ovarian, and lung cancer treatment, is derived. 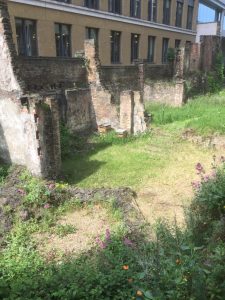 Noble Street
Running along the length of Noble Street is a line of ruined 19th-century warehouses. They were destroyed in the Blitz, the heavy and frequent bombing raids carried out over Britain in 1940 and 1941. In fact, this area is one of the only remaining examples of a bomb site in the city. But while the Blitz destroyed huge swathes of the city, it also revealed tantalising glimpses into it’s past.

If you look carefully, you’ll see older masonry hidden below the brickwork and amongst the wildflower meadow. This is the remains of a rectangular watch tower that formed part of the Roman fort. Built around 120 AD, it covered an area of 12 acres and once housed as many as 1,000 soldiers. Some 90 years later, in about 200 AD, a city wall was constructed, incorporating the earlier fort. Roughly contiguous with the modern day Square Mile, the wall stretched for 2 miles from Tower Hill to the East to Blackfriars station in the West. It was one of the largest construction projects carried out in Roman Britain, with more than 1 million blocks of ragstone being shipped to London from Kent. Although there are only a few fragments of the wall still standing today, this one single structure would define and defend the city for over a 1,000 years.

Noble Street is now kept as a wildflower meadow. See if you can spot the beehives nestled in among the 70 different species of wildflower, maintained by beekeepers from the Worshipful Company of Wax Chandlers. 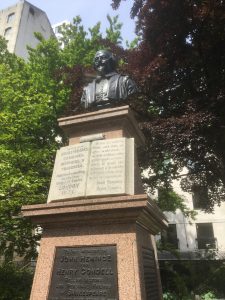 St Mary Aldermanbury Gardens
If you walk along Love Lane, so called after the trade plied here in the Middle Ages, you’ll find a public garden. There are flower beds, a lawn and benches to sit and enjoy the space. There are also the stone foundations of a church, St Mary Aldermanbury, gutted during the
Blitz. In 1966 the ruined walls were dismantled and shipped to Fulton, Missouri, USA, where they now stand as a memorial to Winston Churchill’s ‘Iron Curtain’ speech made in Fulton in 1946.

You’ll also find a bust of William Shakespeare, a memorial to his fellow actors Henry Condell and John Hemmings who both lived in the parish and were buried at the church. After Shakespeare’s death in 1616, they were instrumental in collating and printing the first and most authoritative collection of 36 of Shakespeare’s plays. Published in 1623, this book is known today as the First Folio. It is the only reason so much of Shakespeare’s work is known and survives today. Without it, we would not have Twelfth Night, The Tempest or
Macbeth. And without the plays, there would be no William Shakespeare”.

Alice Trickey is a Blue Badge Guide working in London. She is also Winner of the Institute of Tourist Guiding’s award for St Paul’s Cathedral.