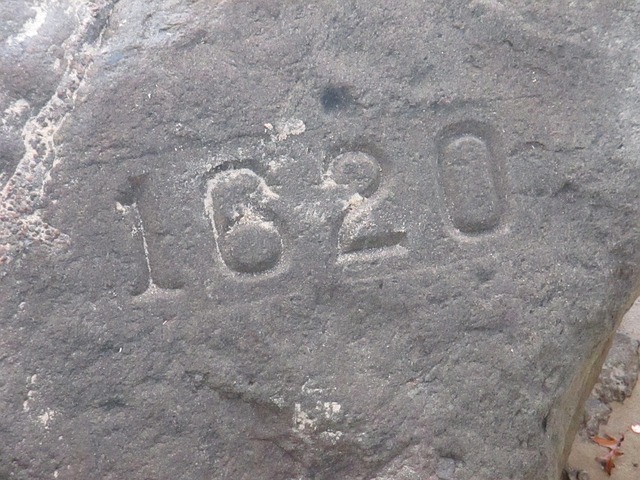 On 16 September 1620, the Mayflower sailed from Plymouth, Devon with 102 passengers to set up a colony on the coast of Massachusetts in what is now the United States of America. It is estimated that 10 million Americans alive today can claim ancestry from the colonists. Next year is the Mayflower 400 anniversary and starting this November will be a year-long commemoration with festivals, artistic installations and a huge network of community events taking place in the towns and cities that make up the Mayflower trail.  Blue Badge Guide Ian Newman reminds of the celebrated story.

Why did they go?
The colonists known as the ‘Pilgrims’ or ‘Pilgrim Fathers’ were members of a non-conformist puritan congregation from an area of Nottinghamshire known as Bassetlaw centred on the village of Scrooby. They were a non-conforming group who were not in communion with the Church of England but they were also separatists who maintained that their differences with the established church were irreconcilable.

Laws passed during the reign of Elizabeth I in the late 1500s made it illegal not to attend church with heavy fines imposed for those who did not comply. During the 1580s three puritan, non-conformist ministers were executed for sedition. One of them, Richard Penry, advised non-conformists to emigrate and many did, principally to The Netherlands and Newfoundland. The Nottinghamshire congregation chose to remain in England. When James I succeeded Elizabeth as monarch the puritans had hoped for some concessions but only one was granted (an English translation of the bible). 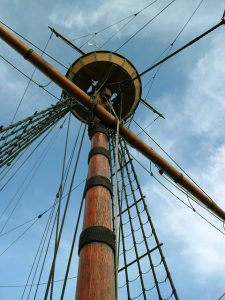 How the Mayflower mast would have looked

Scrooby was in the Archdiocese of York and, up until 1604, the Archbishop of York had some sympathy with the Puritans. In 1606 Tobias Matthew became Archbishop of York and resolved to rid the diocese of puritans. Conditions had become intolerable for the Scrooby congregation who tried to emigrate to the Netherlands from Boston (on the coast of Lincolnshire) in 1607 but were arrested. Their second attempt in 1608 was successful but by 1617 they had become restless; many had used up their savings and many were frustrated that their children were losing their English identity. The decision was made to form their own colony overseas. There were opportunities in a number of territories but the Pilgrims chose the eastern coast of North America.

There was already an established English colony at Jamestown in Virginia so they chose a site that was close enough to trade but distant enough to avoid religious and political differences. 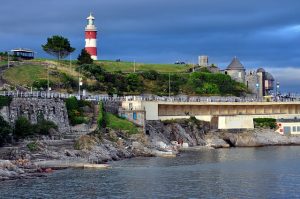 The Voyage
Two ships were hired; the Mayflower and the Speedwell. Many of the congregation based in Leiden boarded the Speedwell and travelled to Southampton in Hampshire where the entire party were united. The ships sailed from Southampton on 15 August 1620, but the Speedwell sprang a leak and the two ships put into Dartmouth, Devon for repairs. Having sealed the leaks, the party set out for a second time but Speedwell leaked again and the party put into the port of Plymouth. In Plymouth, the decision was made that the Speedwell was not seaworthy. The party of 120 was pared down to 102. After a harrowing voyage during which running repairs were necessary, land was sighted on November 9. The land was Cape Cod. An attempt was made to sail to the Hudson river but the navigation was too difficult. During the voyage of 65 days, one crew member and one passenger died and one baby was born.

2020 sees the 400th anniversary of the voyage of the Mayflower. 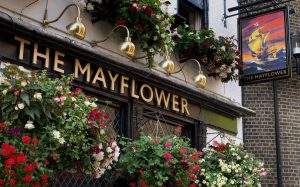 Scrooby, Nottinghamshire
The home of the Elder William Brewster and the congregation. Visit St Wilfrid’s church and sit in the original pews.

Boston, Lincolnshire
The first abortive attempt to sail to Leiden ended with the Pilgrims being arrested. They were held and tried in the Guildhall.

Harwich, Essex
Christopher Jones of Harwich was the ‘Master of the Mayflower’ from 1611 and captained the ship on its famous voyage. There is a Mayflower Heritage Centre in Harwich.

Southampton, Hampshire
The intended point of final departure of the two ships. Visit the historic areas around the seafront. In 2020 there will be Mayflower-themed guided tours.

Dartmouth, Devon
Take a boat trip around Dartmouth harbour, see where the Mayflower was moored (whilst Speedwell was repaired) under Pilgrim Hill. Many of the buildings in Dartmouth today would be recognisable to the Pilgrim Fathers.

Plymouth, Devon
The final point of departure for the Mayflower. The Elizabethan Sutton Harbour would still be very recognisable to the Pilgrims. Island House, Jacka’s Bakery, The Refectory and the former Dominican Friary which is now the home of Plymouth Gin are thought to have accommodated the Pilgrims whilst they waited for favourable winds. The Mayflower Steps memorial is on the jetty in Sutton Harbour.