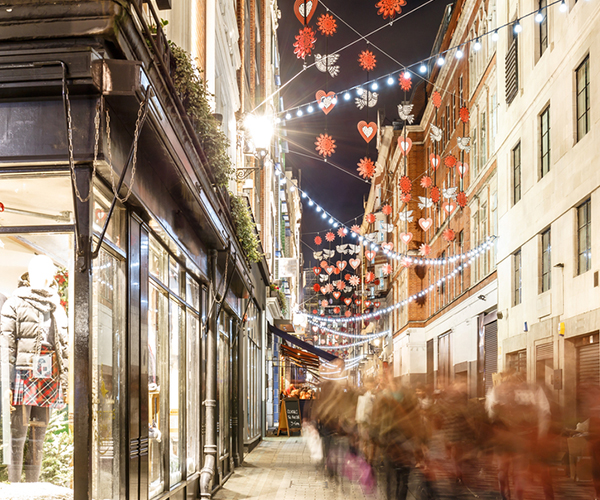 ‘Soho – Magic Syllables! For when a respectable Londoner wants to feel Devilish he goes to Soho, where every street is a song.’   Thomas Burke, Nights in London Town, 1915.

Grease is the word
In the 1978 hit film Grease, there’s a scene where the kids from the all-American Rydell High School compete for the hand-jive competition. This is a dance that actually has its origins on this side of the pond. It was invented in the basement of The Cat’s Whisker nightclub in Soho’s Kingly Street – in the heart of swinging London. The cramped conditions of the subterranean venue restricted all dance moves to hands, arms and upper-body only. 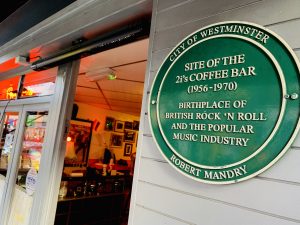 Boho Soho
Today the former jukebox club serves lunches to office workers. In its heyday however, The Cat’s Whisker and the 2i’s coffee bar (in nearby Old Compton Street) were the height of bohemian cool. The mood was captured in the 1959 film Expresso Bongo – the first UK movie to feature both bare-breasted women and British pop singer Cliff Richard (starring as Harry Bongo). Incredible but true!

People flocked to these clubs to hear skiffle – a new musical sensation emerging from trad jazz. Its stars included Britain’s first teen idol Tommy Steele and (father of Skiffle) Lonnie Donegan. They inspired upcoming acts, including The Beatles. Life in The Cat’s Whisker was captured in Picture Post magazine by photographer Ken Russell. This was before he became the famous director of films like Women in Love and the last of the (antidote to James Bond) Harry Palmer movies, staring Michael Caine. Health and safety concerns closed the doors of The Cat’s Whisker for good in the late 60s. It became London’s first Angus Steak House. 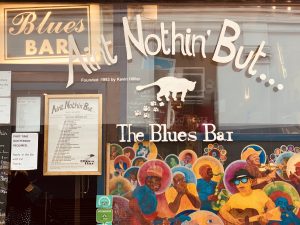 Whether music, fashion or food is your thing, bohemian Soho has it all. This is London’s favourite village. And it’s at the beating heart of our vibrant and ever-changing capital. Playwright John Galsworthy (Forsyte Saga) described Soho as: “Untidy, full of Greeks, Ishmaelites, cats, Italians, tomatoes, restaurants, organs, coloured stuffs, queer names and people looking out of upper windows, It dwells remote from the British body politic.” Galsworthy, you’ll not be surprised to learn, grew up in Kingston-on-Thames – in the buttoned-up suburbs.

A stone’s throw from The Cat’s Whisker is the former Bag-‘O’-Nails night club. Its name derives from Bacchanalian – a reference to Bacchus, the Greek god of wine, merriment and general excess.

Today it’s The Court – a swanky new £600-a year private members club. The dark basements of the 70s and the mosh pits of the 80s have all been replaced with an elegant piano bar. In its 60s heyday however, rock royalty kicked off their shoes here. 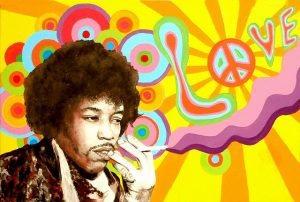 During 1967’s ‘Summer of Love’, Jimi Hendrix played his first UK gig here, having just purchased his famous 19th-century British dragoon jacket (a brilliantly-dandyish look copied later by both Michael Jackson and Adam Ant) from groovy retailer I was Lord Kitchener’s Valet. This was the shop from which those in the know sought out their fab 60s’ gear. It had branches in Soho and in Chelsea. A year after Jimi’s groundbreaking Bag-‘O’-Nails debut. Paul McCartney met his future wife, Linda, here in the same club.

GI Jive
Just up the road was The Nest. This was one of London’s first black nightclubs. In the inter-war period it hosted legendary stars including Louis Armstrong. In the words of one contemporary writer, The Nest was: “Famous for its uninhibited high-spirits, its marijuana-scented air and its corned-beef hash”. 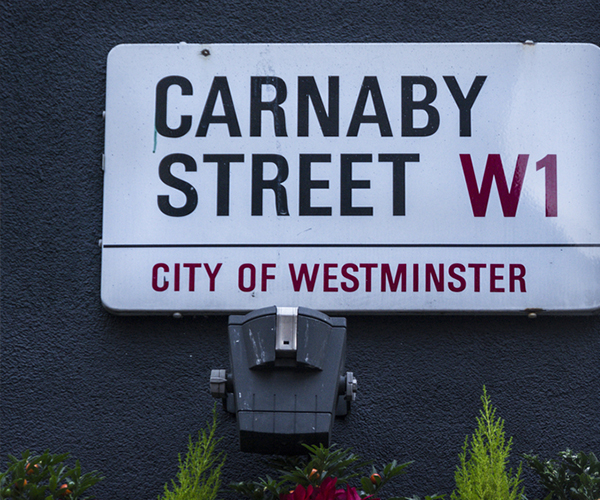 During WW2 US soldiers found a warm welcome here. This was during London’s ‘friendly invasion’. American troops in the capital were, in the words of my own father, himself a wartime military officer: “Over-fed, over-paid, over-sexed and over here”. It’s certainly true that many young women enjoyed the attentions of glamorous US soldiers. They had a ready charm, a breezy confidence and stylish uniforms (nothing like the scratchy woolly ‘battle dress’ of the Brits, Anzacs and Canadians). Civilians faced their own sartorial challenges – sporting ‘utility’ clothing. Wartime rationing meant these garments were minimally-constructed. Utility dresses were particularly flimsy, leading to the popular 40s joke: ‘One Yank – and they’re off’. 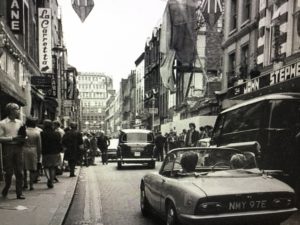 A Lotus Elan rumbles down a blitz-damaged Carnaby Street in the 1960s.

The life and times of Ludwig van Beethoven were a tad more sober. His ninth symphony premiered at the Argyll Rooms on nearby Regent Street. 2019 is the 75th anniversary year of the liberation of Europe. In 1944, it was the rhythm of Beethoven’s fifth symphony (echoing Morse code signals) that alerted resistance forces in Nazi-occupied France that liberation was finally on its way.

If neither the music of the 1800s nor the 1960s floats your boat, then head around the corner to Foubert’s Place. It was here, in the 1980s, that Philip Salon hosted the Mud Club. It showcased New Romantic acts like Bauhaus, Siouxsie and the Banshees – and the late great Steve Strange, lead singer of electro-synth band Visage. English goth culture exploded onto the scene here too – at the Batcave – where Nick Cave and Marc Almond played to a packed house. 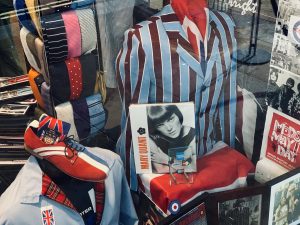 If you enjoyed Austin Powers’ take on Swinging London, then a trip up SoHo’s Carnaby Street is a must.

All of this rich musical history can be unearthed in a just a few of Soho’s streets. The area remains one of London’s most vivid and cosmopolitan neighbourhoods – one that’s attracted a host of colourful characters over centuries. It’s where you can be exactly who you want to be. And it’s this that makes Soho so exciting, so diverse and so very special.

Antony Robbins, aka Mr Londoner is a Blue Badge Guide working in London. He leads the tours for Soho Music Month, held each June and managed by Soho landlord Shaftesbury PLC. He is also a communications consultant and broadcaster.