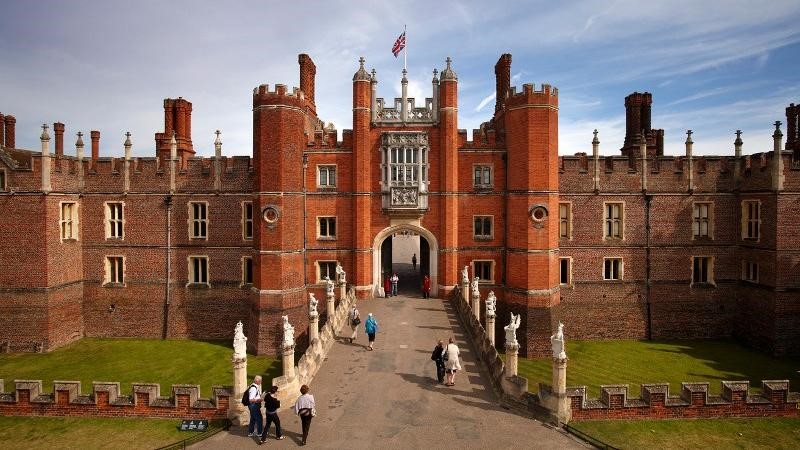 Arriving at Hampton Court Palace, walking towards the towering brick entrance gate (although it used to be two storeys higher!) into the expanse of the cobbled Base Court is like entering into another world – indeed a treasure trove of several other worlds. Blue Badge Guide Amanda Hutchinson takes us on a tour of the palace that has something for everyone – a vast ‘two for the price of one’ palace of two halves.

Spot the joins and mistakes
Starting with the buildings themselves you can count the 241 decorated chimneys and spot the places where King Henry VIII’s 500-year old palace joins onto the Baroque splendour of Christopher Wren’s rebuild 150 years later for King William IV and Queen Mary II. There are also lots of tucked away details and mistakes to spot if you know where to look. The fate of King Henry VIII’s six wives is well known: divorced, beheaded, died, divorced, beheaded, survived. 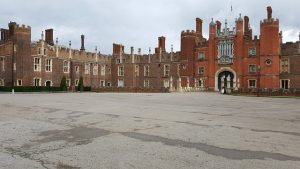 See the many chimneys from the courtyard at Hampton Court Palace

At Hampton Court, however, divorced or executed did not always mean totally erased. When King Henry arrived with his third wife Jane Seymour those in charge of redecorating the palace must have prayed that he would not look up as he passed under Anne Boleyn’s Gateway in case he spotted the romantic H & A love knots carved in stone that someone had forgotten to remove, let alone that he might look back at the arch and see disgraced Thomas Wolsey’s cardinal’s hat still on display above his coat of arms.

Inside the Tudor half of the palace, high on the soaring hammer beamed timber roof of the Great Hall the sharp-eyed can spot the painted carved faces of ‘eavesdroppers’ reminding courtiers and servants not to gossip, and the pomegranate symbol of Henry’s first wife Queen Katherine of Aragon is still carved on some of the doorways. 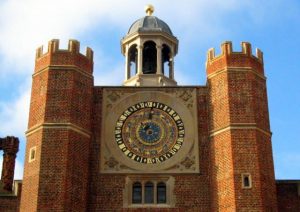 Check out the Astronomical Clock in Clock Court too – the sun revolves around the earth – a ‘mistake’ in our eyes but it’s what people believed in 1540 when it was made. Apart from being a beautiful object it also gives the time of high tide – useful when awaiting the arrival of the Royal Barge from one of the King’s many other riverside palaces such as Greenwich, Bridewell, Whitehall or Richmond. 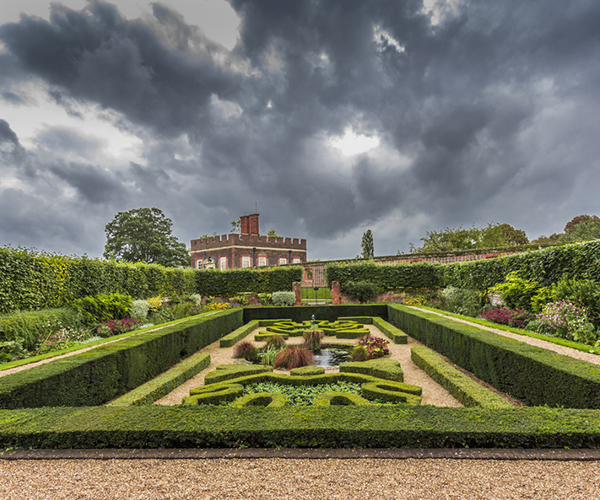 Bump into kings and ghosts
To visit Hampton Court is to experience history as it might have felt when it wasn’t ‘history’ but real everyday life. Costumed actors enact things as they would have taken place, and visitors can don a cloak and join processions, sit on thrones, play board games and turn the roasting spit. You may even bump into the King himself processing through the palace.

If ghosts are your thing Hampton Court is high up on the UK’s ‘most haunted’ list. Henry’s wife number five, the 18 year old Queen Catherine Howard, is said to run screaming along the Haunted Gallery to plead with the King who was at prayer in the Chapel (it didn’t work, she was the second Queen of England – both of them wives of the same man – to be executed at the Tower of London).

The Grey Lady, ‘slight rustles’ and retreating footsteps in gloomy courtyards – all sorts of mysterious ‘ghostly’ things have been reported over the centuries. 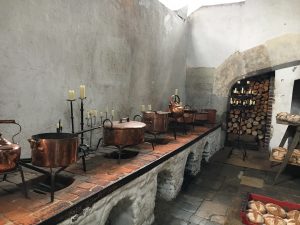 The kitchens at Hampton Court Palace

Experience Tudor mass-catering
Possibly more cheerful these days are the Tudor Kitchens – the largest surviving in Europe – which once produced over 1200 meals a day which were served to the King’s courtiers in the Great Hall ‘canteen’. Through the clever 21st century technology use of sights, sounds and smells the experience of walking through the kitchens is memorable: stock pots bubble away, officials of the Board of the Green Cloth discuss getting the best possible prices for food, spits laden with joints of fresh meat are turned over the roaring hearths where 1.3 million logs were burnt a year, and Tudor recipes are tested in live cooking demonstrations. The designers of these kitchens were clever: built centuries before refrigeration Fish Court is a Tudor fridge – a deliberately high walled and sun-free open-top corridor to keep food stores cool and assist the pastry chefs with the preparation of elaborate confections. 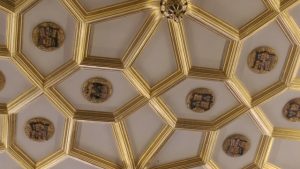 The ceiling of the Great Watching Chamber, Hampton Court Palace

Imagine the missing bits
There are lots of bits missing from the palaces. As we imagine the great processional route of King Henry VIII from his private quarters through the Great Watching Chamber (where his courtiers waited for hours for him to pass – although they wouldn’t have dared to catch his eye – they just hoped to be noticed) to the Chapel we may not realise that the door from which the king would have emerged no longer goes anywhere – it is one of those ‘joins’ between the two palaces. Also missing is the Great House of Easement over the moat at the main entrance which, in the ‘all mod cons’ palace created by King Henry, housed more than 20 ‘garde robes’ or lavatories. The palace also had fresh water piped in from a spring three miles away. 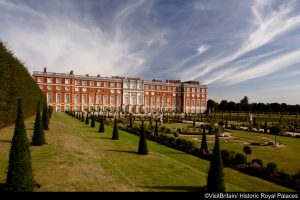 The sheer scale of it all
The sheer feat of building and running the palace is extraordinary: the millions of bricks, tons of lead, hundreds of oak trees and miles of pipes used in its construction; the 2,850 pieces of arms and armour displayed on the walls of William IV’s Guard Chamber; the 240 year old largest grapevine in the world; the 200,000 flowering bulbs planted each spring in the old ‘stew ponds’ in the gardens where fresh fish for the Tudor kitchens were kept; the 200 cooks, sergeants, grooms and pages; the daily supply of ale of more than 13,000 pints a day. In one year during Queen Elizabeth I’s reign 8,200 sheep, 2,330 deer, 1,870 pigs, 1,240 oxen, 760 calves and 53 wild boar were procured for the kitchens. 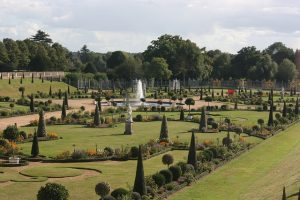 A very rare treat
If you visit Hampton Court Palace over the next few months you will have an extra special treat. The first time I saw this temporary display few weeks ago I was spellbound. A piece of richly embroidered silk used as an altar cloth in a small country church in the village of Bacton for hundreds of years is now believed to be the only known surviving example of Queen Elizabeth I’s clothing. You can see the Bacton Altar Cloth displayed alongside the iconic Rainbow Portrait, attributed to Marcus Gheeraerts the Younger, on loan from Hatfield House, which depicts the queen wearing a gown that bears a striking resemblance to the cloth.