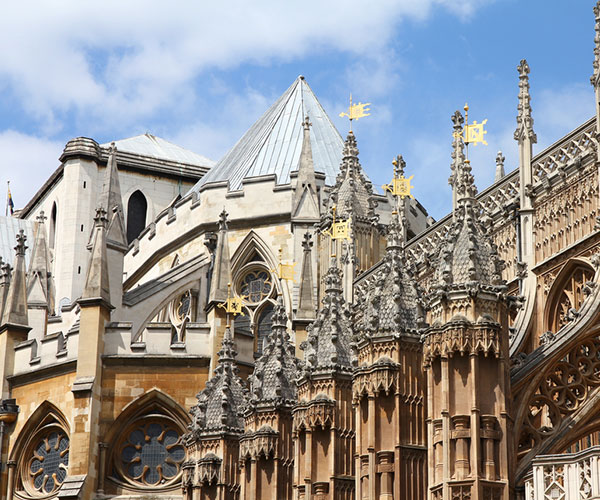 Whenever I walk around London, I like to imagine what was life like for those who lived here centuries ago. With this post, I’ll try and tell you the story of a queen through some of the most famous London buildings.

An unlikely queen
Elizabeth Woodville, the widow of King Edward IV, died on 8 June 1492. She wasn’t just the wife of a king, but also the mother of another king – Edward V – and of a queen consort – Elizabeth of York. We know that she was born in 1437 and that her family were wealthy but not aristocratic. Imagine the uproar among the nobility at court when news of the (secret) wedding started to circulate. Edward IV had married Elizabeth Woodville, five years his senior, probably in May 1464, the first king of England to marry a commoner since the Norman Conquest. There was another problem – Elizabeth was a widow, had already two sons, and she came from a family of Lancastrians, while Edward was of the House of York. Her first husband, Sir John Grey, had been killed in battle in 1461 fighting for the Lancastrians. She brought no money, no lands, no international connections. But she was fertile and bore the king ten children – Elizabeth who married Henry VII, Mary, Cecily who married twice, Edward V, Margaret, Richard, Anne who married the Duke of Norfolk, George, Catherine who married the Earl of Devon, and Bridget who became a nun. 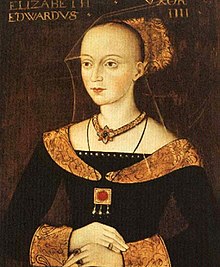 A romantic start
The White Queen – a book and TV series – refers to the legend that Elizabeth and Edward met under an oak in Whittlebury Forest. She, a helpless widow, had been deprived of her husband’s inheritance and decided to plead for her sons. The king fell in love with the beautiful Elizabeth and asked her to marry him in secret. Not even her father was informed. Some historians claim that the king, a renowned womaniser, was already married to Eleanor Butler, née Talbot. This fact was later used to declare his wedding to Elizabeth null and void and their children illegitimate. 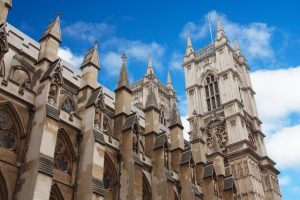 Westminster Abbey – where kings and queens are crowned
Elizabeth was crowned queen at Westminster Abbey on 26 May 1465. It was a lavish affair. The abbey as we know it today was begun in 1245 under the reign of King Henry III. The nearby Palace of Westminster was one of the royal residences of the king and queen. Here, their eldest daughter, Elizabeth, was born. But this marriage, although a successful one, was not going to be easy. Edward was often away fighting and he had mistresses. At that time, it was perfectly normal for men to leave their pregnant wives alone, for health and safety reasons. Legitimate heirs were of paramount importance, yet men needed to have physical outlets, but in this case, Edward and Elizabeth’s relationship never weakened.

A turbulent time
It was the time of the Wars of the Roses, which saw the Lancastrians and the Yorkists fight for the throne. Elizabeth’s influence at court caused increasing hostility between the king and his greatest ally, Richard Neville, the Earl of Warwick. In the end, the two found themselves on opposite sides and the queen’s father and brother were killed in battle in 1469. Warwick managed to capture the king. 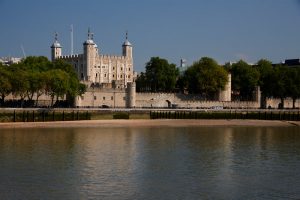 The Tower of London

Escape from the Tower of London
Alone and in danger, Elizabeth secretly left the Tower by night, sailed by barge to Westminster and claimed Sanctuary at the Abbey on 1 October 1470, with her three daughters – Elizabeth, Mary and Cicely – and her mother. She was taken care of by the Abbot of Westminster, who probably installed the royal family in rooms in Cheyneygates, near his own house. The queen gave birth to Edward V while in Sanctuary and had him baptised in the Abbey. The Abbot’s house, later the Deanery, and Cheyneygates were both destroyed by bombs in 1941. Two rooms were rebuilt over the entrance to the cloisters but they are not open to the public. When in 1471 Edward IV regained the throne, she left Sanctuary for the Palace of Westminster and then they all moved back to the safety of the Tower. It was here, on 21 st May 1471, that the deposed Lancastrian king, Henry VI, was found dead, probably murdered, although according to the official version he died of melancholy. 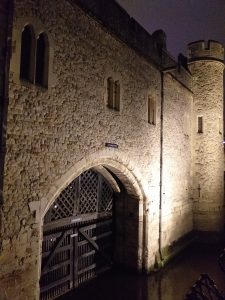 The Tower – fortified residence and prison
The Tower featured several times in the life of Elizabeth Woodville. There were more gruesome events which took place there. One of Edward’s brother, George Duke of Clarence, had rebelled against the king, had put Elizabeth’s father and brother to death, had accused her mother of witchcraft and was therefore imprisoned in the Tower. As he was the king’s brother, his betrayal was seen as particularly serious and he was executed in February 1478, by drowning in a butt of Malmsey wine, his favourite. 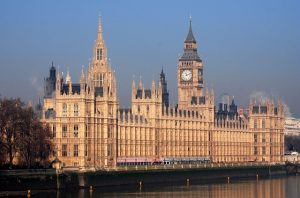 The Palace of Westminster
The previous year, in January 1477, a royal wedding had taken place in the Palace of Westminster. The bride and groom were young children – Anne Mowbray, heiress of the Duchy of Norfolk, and Richard Duke of York, Edward and Elizabeth’s second son. She was just under three years old and he was nearly five. They were married in St Stephen’s Chapel and the banquet was held in the Painted Chamber. 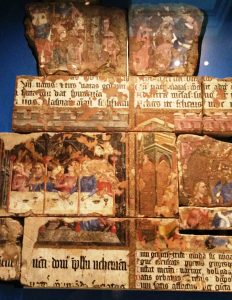 Elizabeth’s world is turned upside-down
Then came 1483 and everything changed. Edward IV suddenly died on 9 April, leaving an heir, Edward V, who was still a minor. Chaos ensued and Elizabeth was left with no choice but claiming Sanctuary at Westminster Abbey once again. She arrived on 31 April and this time she had to face another brother-in-law, Richard Duke of Gloucester. His main objective was to get his hands on both his dead brother’s surviving sons, Edward and Richard. He intercepted Edward on his way from Wales to London, forced Elizabeth to surrender Richard, and he took both boys to the Tower of London. He then had them proclaimed illegitimate and was `himself proclaimed king. He was crowned King Richard III on 6 July, while Elizabeth and her daughters were still in the abbot’s house. Elizabeth never saw her sons again. They had disappeared off the face of the earth and according to Tower tradition, they were murdered in the Bloody Tower on the orders of their uncle Richard.

Her final years
Richard III was killed at the Battle of Bosworth in August 1485 and Henry VII, the founder of the Tudor dynasty, restored Elizabeth as Queen Dowager. She leased Cheyneygates but lived there only for a few months before retiring to Bermondsey Abbey, where she died on 8 June 1492. On 12 June she was buried next to her husband in St George’s Chapel at Windsor Castle, which you can visit once it reopens to the public. According to a letter by Andrea Badoer, the Venetian ambassador, Elizabeth may have died of the plague, hence the hasty and simple funeral ceremony, certainly not fit for a Queen Dowager.

Her legacy
In 1486, her eldest daughter, Elizabeth of York, had married Henry VII, of Lancastrian descent, so the two rival houses were united at last, bringing to an end the Wars of the Roses. They are buried in the Henry VII’s Chapel at Westminster Abbey.