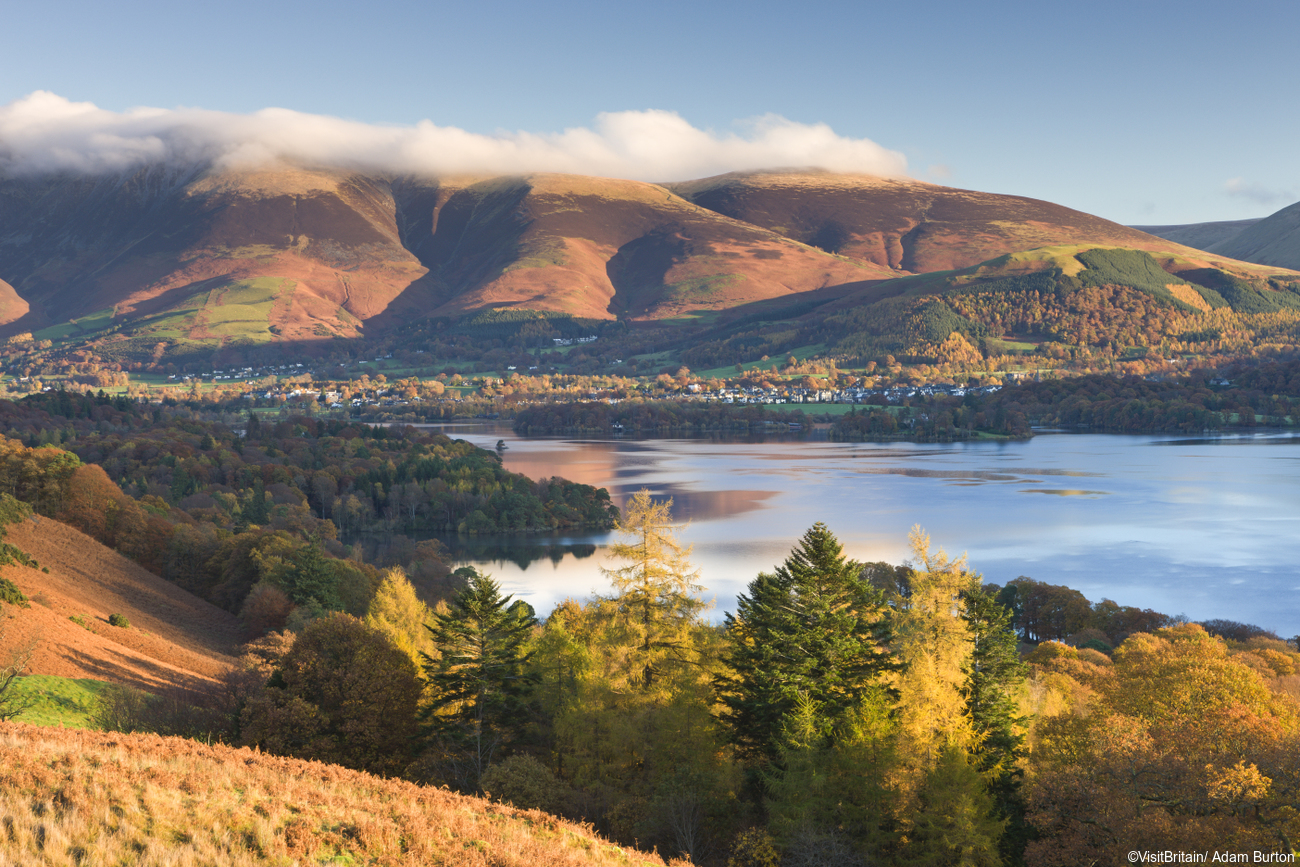 Beatrix Potter was born on the 28th July 1866 in South Kensington and died in Sawrey Cumbria 77 years later. At the time of her death she had made a large amount of money by writing children books and also left 14 farms and 4000 acres of land to the National Trust.

Connection with the Lake District

Her father was a barrister and interested in photography and the environment, so the family spent long summer holidays (up to 3 to 4 months) in the countryside initially in Scotland but later for 21 years in the Lake District. 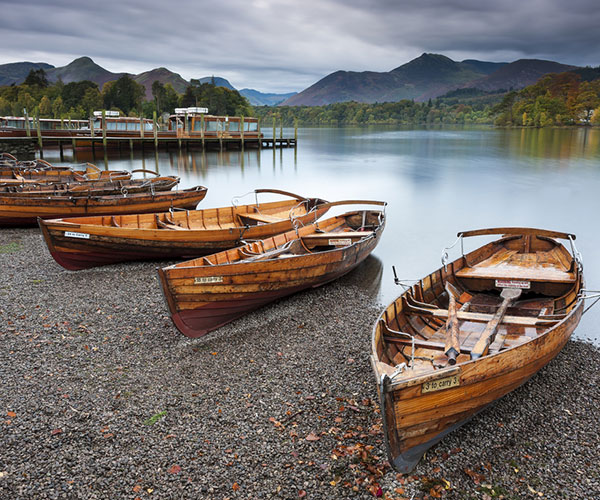 The Lake District, boats by the lake

The first holiday in the Lake District was at Wray Castle, on the shores of Lake Windermere a Gothic Revival castle built by the Dawson family who had acquired their money through Gin production. It was here that Beatrix was introduced to Canon Hardwick Rawnsey one of the instigators of the National Trust and he took a great interest in her drawings and encouraged her to publish her first book The Tale of Peter Rabbit.

Today you can arrive at Wray Castle by the Windermere Steam Cruises (Green route up to 14 /day) or by car, foot or bike. Beatrix Potter’s favourite room at Wray Castle was the library and there is now a Peter Rabbit Adventure Room for younger visitors. 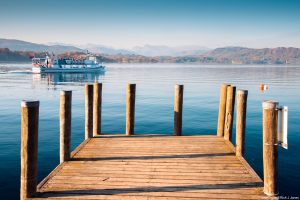 Brockhole Jetty on the shores of Lake Windermere in the Lake District. (c) Visit Britain

Beatrix’s childhood was very lonely not going to school and being home educated by a governess.  Instead she made friends with her pet animals and learned to draw them. Six years later her brother Bertram was born to a much more different life style having been born a boy and was sent away to boarding school. It was through the family friendship with the artist Millais which gave Beatrix an insight into the world of artists along with her many visits to the Royal Academy. Whilst painting lichens and fungi she observed them, and her scientific interests increased. A visit to the Armitt Museum in Ambleside is a fascinating insight into her drawings which she left to them along with some of her personal first editions on her death. When you visit there is a very modest entrance fee of two pounds and it is close to the little house on the bridge in Ambleside.

In 1893 she started to write to a child, a son of her own governess and addressed her letter “My dear Noel I don’t know what to write to you so I shall tell you a story about 4 little rabbits” and so the story of Peter Rabbit began. The first farm she bought with her earnings from The Tale of Peter Rabbit was Hill Top in 1905, part investment /part holiday home to escape from her parents. It is owned now by the National Trust and can be visited by taking the ferry from Bowness to reach the shores of Windermere by Claife Heights. Hill Top is the base of many of Beatrix’s stories and the stove is the same one as described in the The Tale of the Pie and the Patty Pan. Upstairs you can see the floorboard that was lifted by the joiner to rescue Tom Kitten from becoming a pudding for the rat Sam Whiskers. 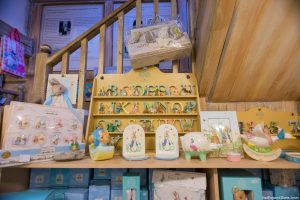 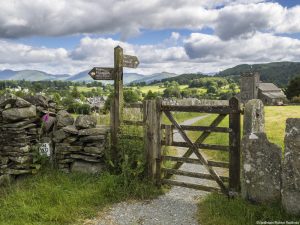 Peter Rabbit was created because for 21 years on and off the Potters family holidayed in the Lake District. Perhaps this year you would like to retrace Beatrix’s steps and see her holidays homes not just on the shores of Windermere Wray Castle and Holehird but also at Fawe Park and Lingholm on the shores of Derwentwater where in The Tales of Squirrel Nutkin (Owl Island is St Herberts island) and both The Tale of Mrs Tiggly Winkle and The Tale of Benjamin Bunny were inspired.

The World of Beatrix Potter in Bowness is a whole year-round destination where you can meet and have your photo taken with Peter Rabbit as well as enter the garden of Mr McGregor and smell all the garden fragrances.  It is Europe’s only attraction dedicated to this popular author of children’s literature. This award-winning experience is designed to be enjoyed by the entire family, bringing Potter’s classic tales vividly to life. Take a leisurely walk through the site’s indoor recreation of the Lakeland countryside complete with smells of an English country garden. You can watch a special film about the writer’s life and stop by the  video wall for a brief look at all of her imaginative children’s books. 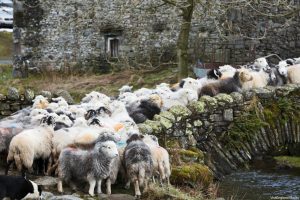 Beatrix Potter was an astute business woman inventing merchandising and it was she who decided to market Peter Rabbit wallpaper, dolls, toys, Jigsaws puzzles and games. When her eyesight began to fail in the 1920’s she happily turned her hand at sheep breeding especially her beloved native Herdwicks found on the highlands of the Lake District and ensured the traditional farming methods would not be lost. She was welcomed into a male’s world and was the first women to be elected president of the Herdwick Sheep Breeders Association which continues to flourish.

Jan Nicolson, British Blue Badge Guide was brought up on a family sheep farm only 20 miles from Hill Top. She has a very personal connection with the area and Beatrix Potter.

“I left Cumbria to go to university but came back to buy another sheep farm when my eldest son was born over 30 years ago which I still own.

In 2017 I bought a letter that Beatrix Potter had written to the Mayor of Kendal congratulating him on the purchase of the Katherine Parr Prayer Book for the Mayors Parlour in Kendal Town Hall. It comes with a replica of the aforesaid prayer book which is signed by Hugh Walpole on his presentation to the Parlour. She also comments that she has bought a loom from 123 Highgate and that she intends to give it to a local famers wife from Coniston who will be able to make good use of it rather than see it in a stuffy museum. Another reason for buying this letter was to prove that Hill Top was not her home but Castle Cottage opposite which although it belongs to the National Trust is not open to visitors.

The season for Beatrix Potter is all year round, the rhododendrons and azalese are well known at Linghom but in the Autumn the colours are magnificent as well as the most important shepherds meets and Ram sales at auctions. Winter sees the sheep coming down from the fells to closer pastures for home where they can be better managed. The National Trust now owns 91 hill farms with about 25,000 hefted Hardwick sheep which are an icon of the Lake District. I would be delighted to show you not only Beatrix’s Potters Cumbria but any aspect of sheep farming including her favourite Herdwick sheep.”