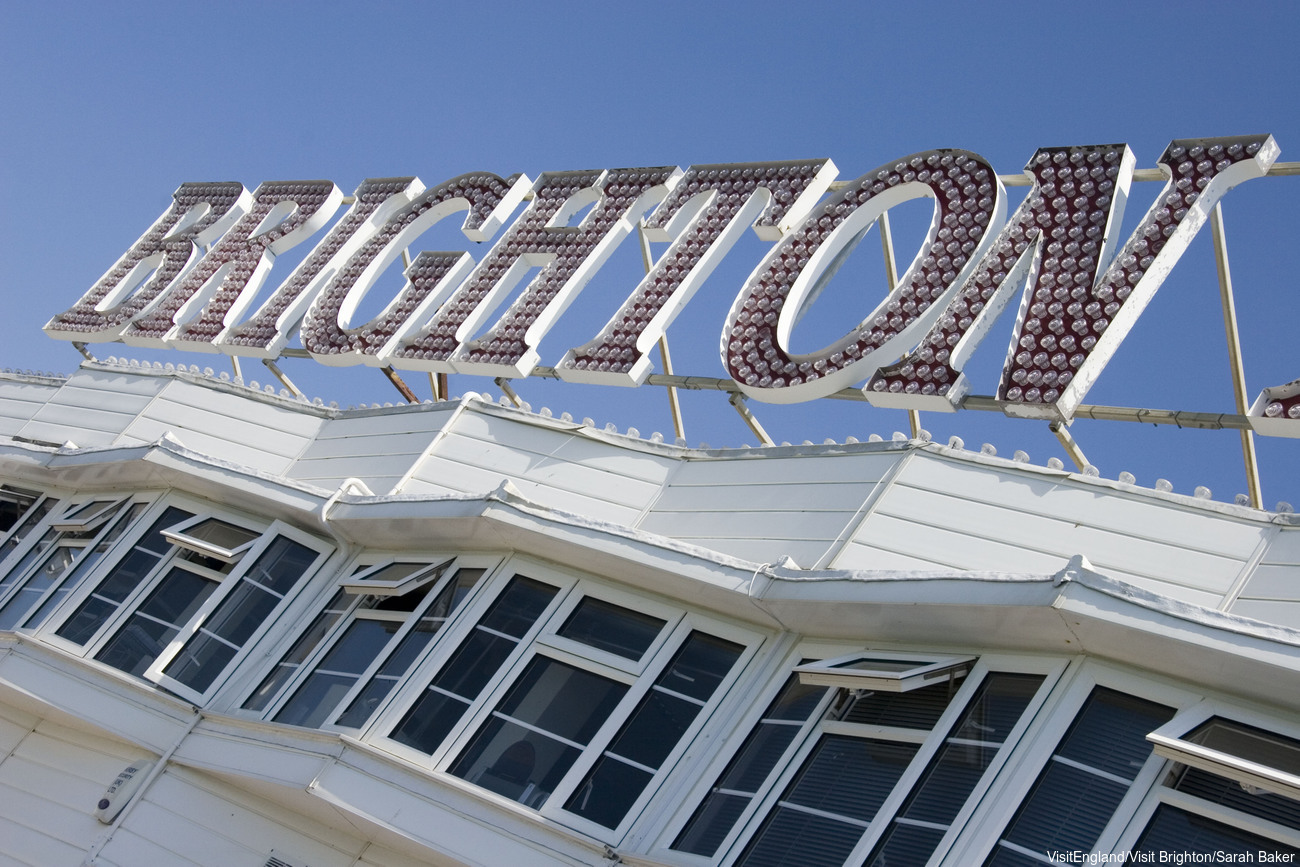 What is it that makes Brighton so unique? Is it the beach pebbles, the bizarre fairytale palace, the eccentric characters, its fame as England’s lesbian and gay capital, the Green politics, the vibrant graffiti, the colourful Regency architecture or is it just the feeling that you’re somewhere a bit different ?

Our Blue Badge Guide Ric Morris takes us on a tour of this cosmopolitan city and tells us just why Brighton is so unique.

1   It’s the nearest south coast to London
Brighton is less than 1 hour by train from our capital city. That’s why, for the last 200 years, it’s been known as ‘London by the sea’ – the resort of choice for those wanting an easy escape from London, whether you are a day tripper, meeting you lover for a ‘dirty weekend’, a mod or rocker, or seeking an alternative way of life.

2   It has the UK’s most eccentric palace
There is no other building like the Brighton Royal Pavilion. A fantastical fusion of Indian styles on the outside and Chinese inside, it was designed for Britain’s most decadent King King George IV as his party palace by the sea. A must-visit. 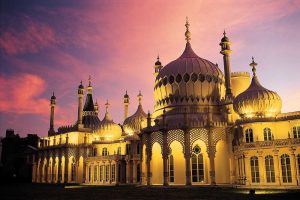 3   It’s the Green capital of Britain
Caroline Lucas is the first and only Green Party Member of Parliament, representing Brighton Pavilion constituency since 2010. In the 2017 general election, she got 52% of the vote, compared to 1.8% as the national average of Green voters. Brighton also leads the way in eco projects. Check out Europe’s first public building made of re-used waste (no regular public access, but visible from William St) or book a visit to Earthship Brighton. 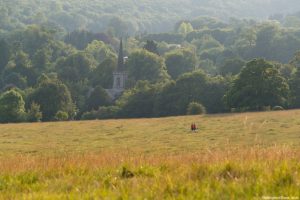 4   The first Body Shop opened in 1976
Anita Roddick’s pioneering herbal cosmetics shop opened in Kensington Gardens in 1976. They moved to bigger premises long ago, but today you can visit the blue plaque and enjoy the buzz of this colourful shopping street.

5   ABBA won the Eurovision song contest here
The Brighton Dome hosted Eurovision in 1974. ABBA came here unknown outside Sweden, but after triumphing with Waterloo they went on to become one of the most successful pop acts of all time. The Brighton Dome originally served as stables for the Royal Pavilion, and is also in an Asian-influenced style. Today it is one of Brighton’s main arts venues. 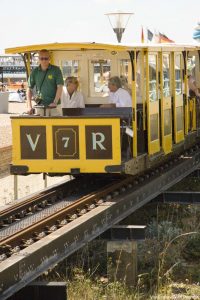 The Volks Railway, which runs along Brighton’s seafront

7   It has spectacular graffiti and street art
Check out the Dead Rock Stars mural on the side of the Prince Albert pub, with a reproduction of Banksy’s Kissing Policemen on the same wall (the original was sold for £300,000). Then wander down the back streets of the North Laine and London Road areas for a dazzling array of international street art. 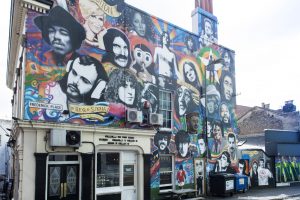 8    North Laine has over 400 independent shops and cafes
Four main shopping streets – Bond St, Gardner St, Kensington Gardens and Sydney St, and increasingly many of the side streets – make North Laine the heart and soul of Brighton. Colourful, funky, hipster, alternative, it’s well worth making the ten minute trip inland from
the beach. 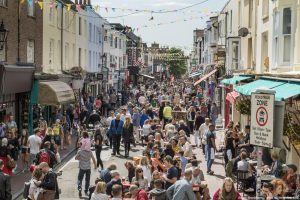 9   It’s the LGBTQ capital of Britain
Brighton hosts the UK’s largest Pride event every August and Europe’s first Trans Pride was held here. It is the most popular city for same-sex weddings and you can see rainbow flags everywhere. All these give Brighton that special mix of diversity and acceptance. Many historical figures, including Virginia Woolf and Oscar Wilde had Brighton connections. Piers and Queers is a historical walking tour of LGBTQ Brighton.

10   The South Downs National Park is on the doorstep
Brighton is the perfect base for day trips. Catch an open-top bus up to Devils’ Dyke for views across Sussex and Surrey, or see some of the most spectacular scenery in southern England – the white cliffs of Seven Sisters and Beachy Head. The quaint towns of Lewes and Arundel,
the cathedral city of Chichester and the genteel resort of Eastbourne, are all under an hour away. 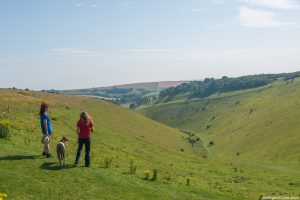 Ric Morris has been living in Brighton since 2007 and runs tours of the city.