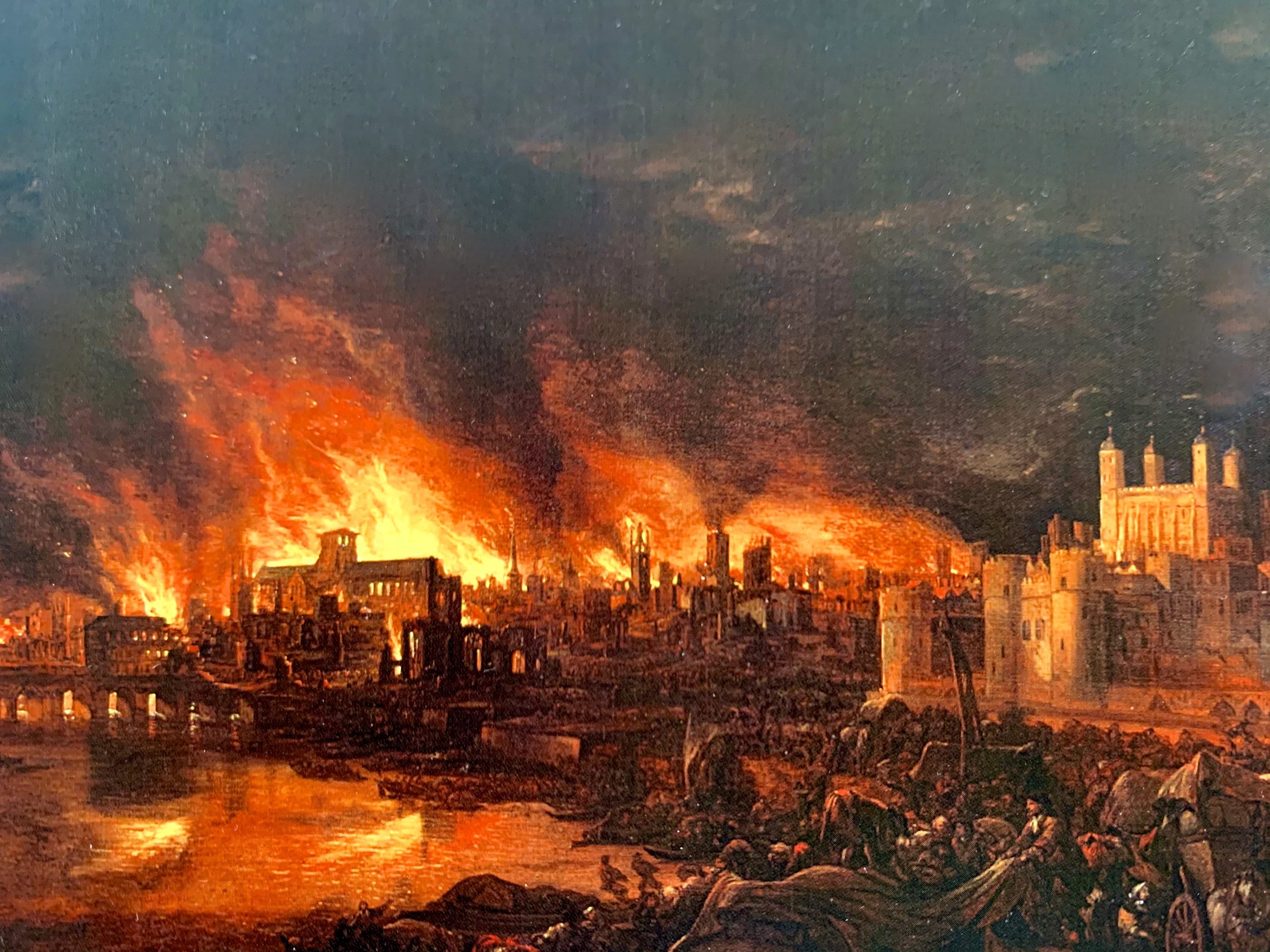 We think of charity fundraisers as a modern phenomenon but, on 10 October 1666, a national fast took place raising £12,000 to support the homeless victims of the previous month’s Great Fire of London. In a new take on an old theme, Mr Londoner explores the legacy of the conflagration. He provides a unique perspective on this tumultuous event – during an already turbulent period in British history.

The facts of what actually took place – most of them at least – are pretty well-established. A powerful east wind fanned the flames that started in a Pudding Lane bakery, in the east of the City. It had been a long hot summer. The wooden buildings were tinder dry. London burned for four days, four-fifths of the City disappeared (including 3,200 houses, 87 churches and 44 livery halls). It’s said that in Pudding Lane the temperature reached over 1,700 degrees C – enough to melt stone. 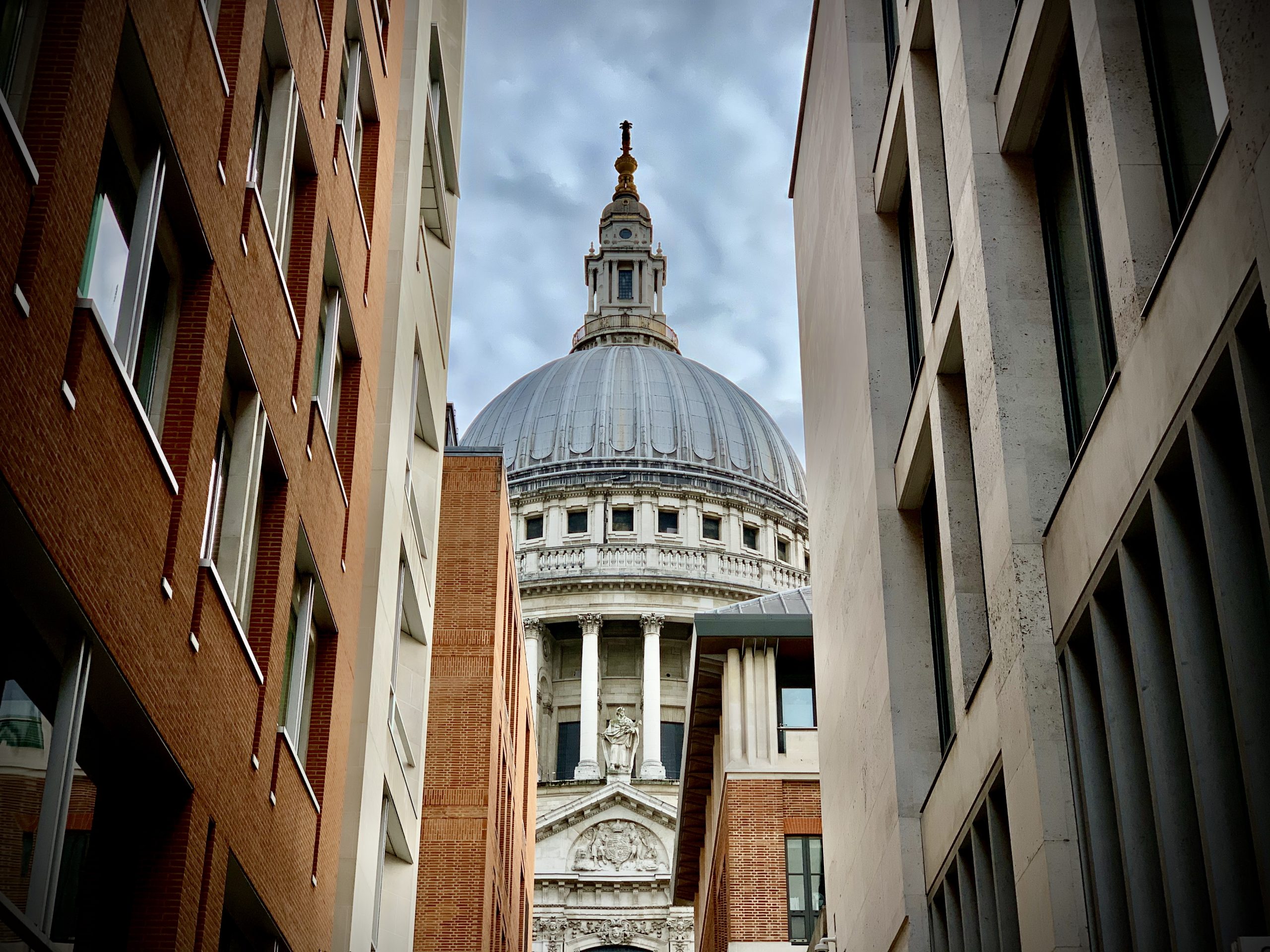 Glimpses of St Paul’s Cathedral, from the north. @Meetmrlondoner

The Royal Exchange, Guildhall and the medieval St. Paul’s Cathedral were lost. St Paul’s probably could have been re-built. But Sir Christopher Wren was determined to create his new-look Baroque masterpiece. The total damage amounted to about £10m – an astronomical sum at a time when the City’s annual income was just £10,000. The unfortunate Lord Mayor of London Thomas Bludworth has gone down in history as a ditherer, who didn’t act fast enough to save the City.

The official death toll of six was remarkably low: the figure however may reflect the way statistics were measured. The deaths of working-class and middle-class people may not have been counted. It’s likely that many more perished amid the smoke and flames. This could be in the hundreds – or even the thousands.

People on the move

A lesser-known consequence was the refugee crisis created as 100,000 internally-displaced people abandoned burnt-out homes. Many more homeless Londoners succumbed to cold and disease as they tried to survive the harsh winter of 1666/67 in the high ground of Moorfields, Highgate and Islington with no roof over their heads. A survey of 1673 reveals a quarter of London’s population never returned.

It’s a popular view that the fire changed London forever, shaping tastes and heralding in a new type of architecture and ways of living. In my view, however, this is overestimated. King Charles II had declared the City would be re-built better than ever and would appear to the world as “purged with fire …to a wonderful beauty and comeliness than consumed by it”.

Several grand plans for how a more open-looking and continental-style city might emerge from the flames were submitted. Long boulevards offering dramatic vistas and rectilinear town plans were the fashion of the day. Diarist, draughtsman and landscape gardener, John Evelyn, developed concepts incorporating a grid system with interconnecting squares. He envisioned streets radiating around circular piazzas, which would serve as market places. 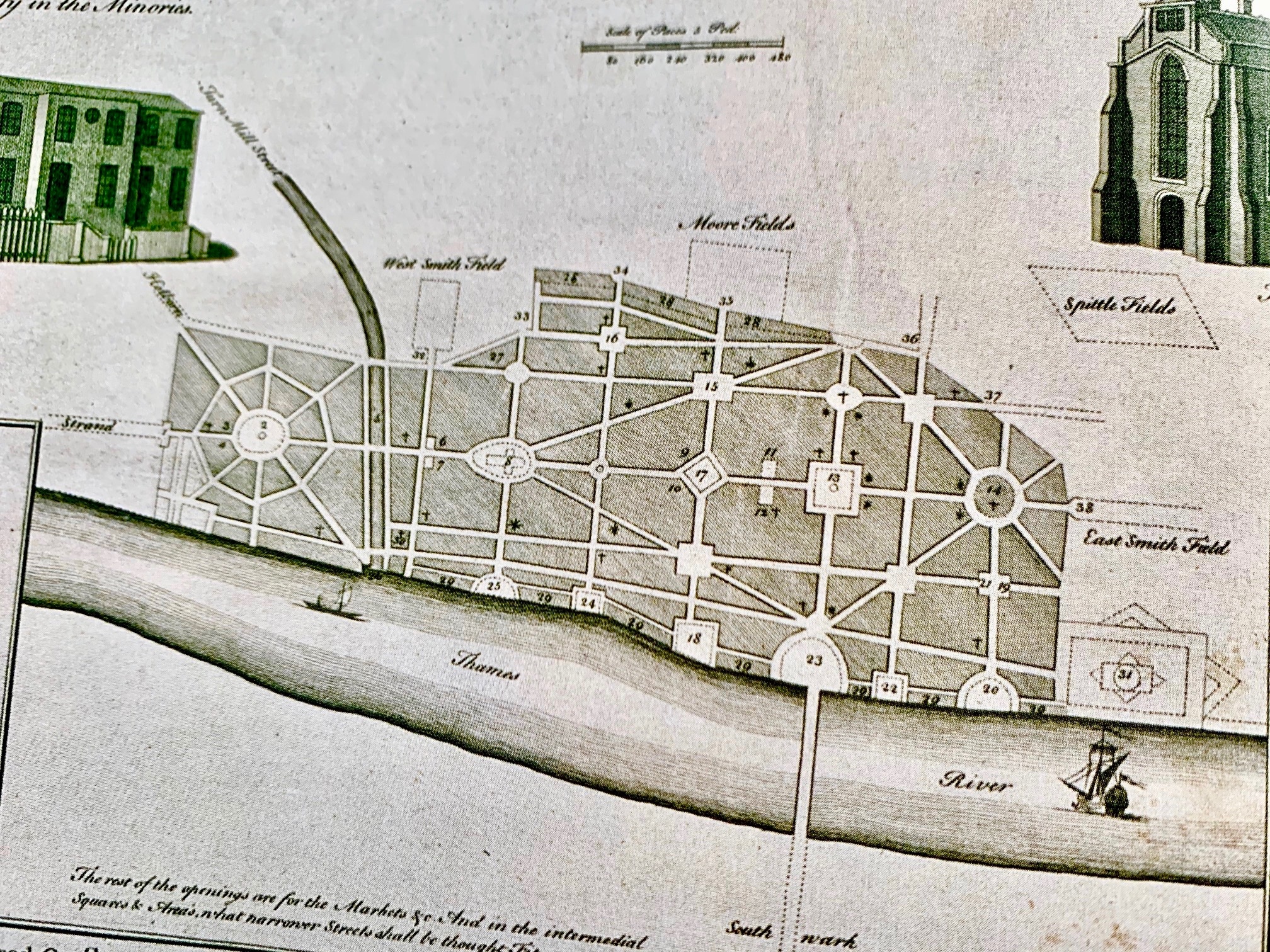 John Evelyn’s plans for London after the fire. Museum of London

Sir Christopher Wren’s plans for sweeping boulevards with elegant stone-fronted buildings were also grand but made no allowance for growth in an expanding city. He also foresaw facing the river with a ‘grand terras’. Although never realised this aspect of Wren’s concept was revisited again in the 19th century. It helped inform the building in 1862 of the Victoria Embankment by Joseph Bazalgette. Wren’s thinking also influenced post-war reconstruction following the Blitz. In addition to St Paul’s, Wren did, however, design 51 churches, 23 of which survive today.

The cartographer and architectural draughtsman Richard Newcourt’s plan was inspired by his religious zeal. He placed God and Church at the heart of his grid concept with a chessboard of 64 squares, each dominated by a church.

Military engineer Captain Valentine Knight had fought on the Royalist side in the civil war. His military-minded thinking cast off any Renaissance fripperies altogether. Knight proposed an extraordinary get-rich-quick scheme for King Charles II. It featured a 30-ft wide toll canal right through the City centre. Knight had misinterpreted the monarch’s ambitions. The King resented the very thought that he would consider benefitting personally on the back of a national calamity. Knight was thrown in jail – and that was the end of his grand designs.

These imaginative – and in some case outright strange – architectural dreams were however never realised. The City lacked one central authority with the powers to make the transformation happen. Ancient property rights and buildings owned by numerous private freeholders made negotiations somewhat tricky. Guided by the hastily-enacted Fire of London Disputes Act, 1666, specially commissioned ‘Fire Judges’ worked quickly and efficiently through their caseloads to resolve competing property claims.

Another obstacle to delivering grand architectural visions was the high-cost involved in these ambitious plans – and the need to re-build at speed. These practical necessities trumped grand plans. The re-construction then was inevitably rather higgledy-piggledy. And the medieval street plan of the City of London remains largely intact to this day. 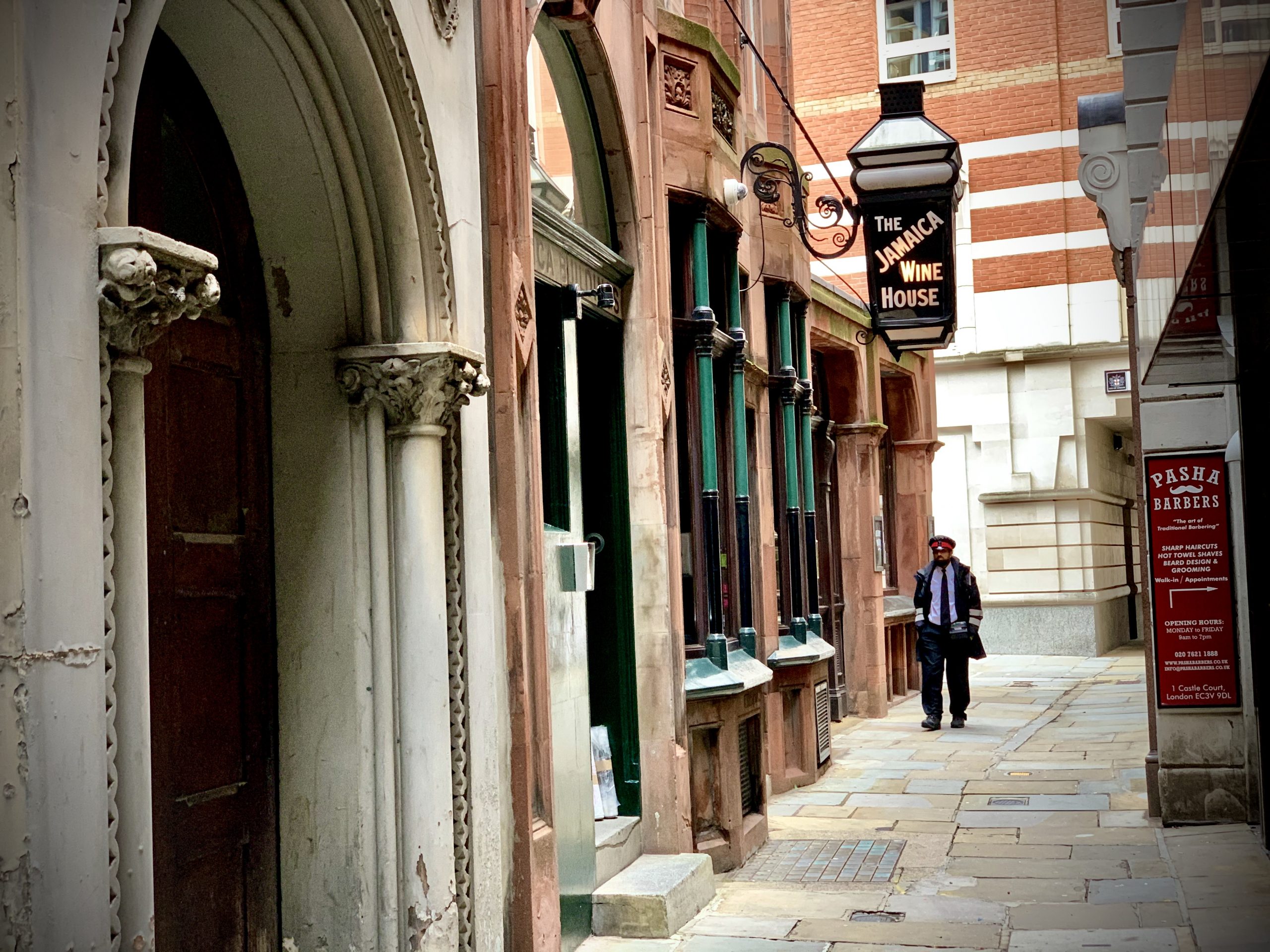 The City’s ancient alleyways survived the flames. Image by @Meetmrlondoner

Contrast this with current plans to build HS2, a new high-speed railway between London, Birmingham and Leeds. The scheme is tearing through ancient woodlands despite determined protests by environmental campaigners.

Much has been said about the new 17th century regulations banning wooden buildings and promoting stone in its place. But wooden construction continued for many years after the fire. And the new buildings were no less insanitary than what had been before. Gone however were the overhanging balconies that had encouraged the flames to leap from street to street so readily.

Changing tastes in a growing city

Garden squares sprung up in the late 17th century as London expanded. They remained popular throughout the 18th and 19th centuries. Bedford and Fitzroy Squares are prime and well-preserved examples. Their popularity is often attributed to changing tastes post-fire, but garden squares had been planned from the 1630s. Inigo Jones created the Covent Garden Piazza in 1632. Then, as now, Londoners’ tastes in architecture, art and fashion evolved naturally – with or without cataclysmic events to spur them on.

Many people think the fire had a silver lining in that it ended the bubonic plague that had claimed the lives of 100,000 Londoners the previous year. The facts however don’t bear this out. Much of the city survived and the poorest and most rat-infested parts of the capital – including Whitechapel and Southwark – escaped the inferno. In fact, the plague was burning out of its own accord. 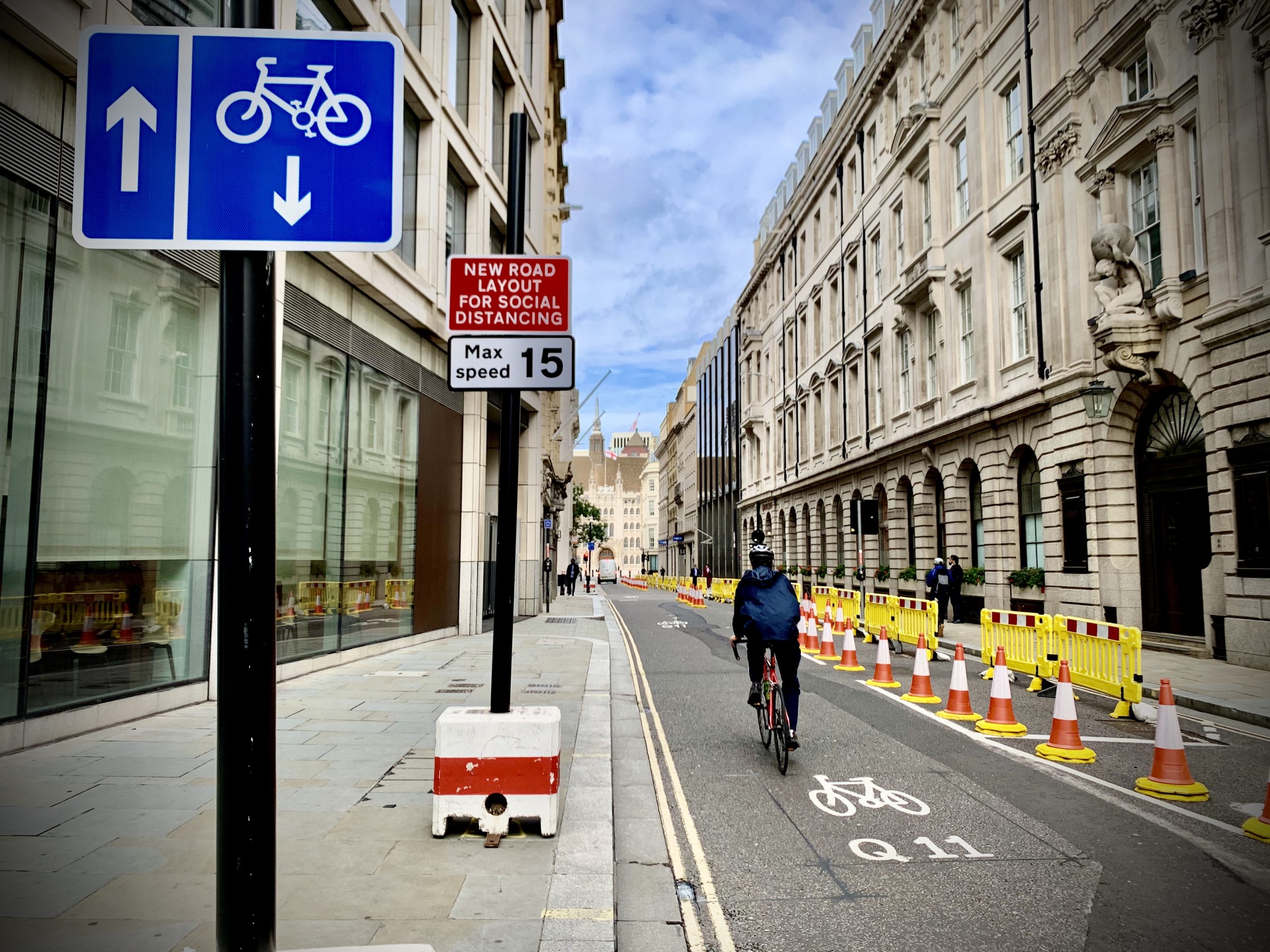 Queen Street was one of the few new streets constructed after the fire. Image by @Meetmrlondoner

After the Fire of London change did happen, however. By 1677 the City was largely re-built. Streets were widened. Thames Street running parallel with the river was raised up and King Street and Queen Street were built from the Guildhall down to the water’s edge. The River Fleet was canalised. Its brick vaults later formed the foundations of streets. At its southern end, the Fleet was completely bricked over. Today this is New Bridge Street, which runs down to the River Thames at Blackfriars. The Fleet River runs in pipes under the street to this day.

Ever eager to spot an opportunity, enterprising Londoners started their own insurance companies, equipped with horse-drawn water tenders to extinguish fires in the homes of policy holders. The idea of public fire brigades was a little further down the road.

The part of the city we today call Monument is named for the Great Fire of London monument. This is the 202ft Doric column built in 1667 by Sir Christopher Wren and Robert Hooke. It marks the spot where the fire broke out. You can climb its 311 steps. Be warned: the ascent up its narrow winding stone stairs is not for the faint-hearted. 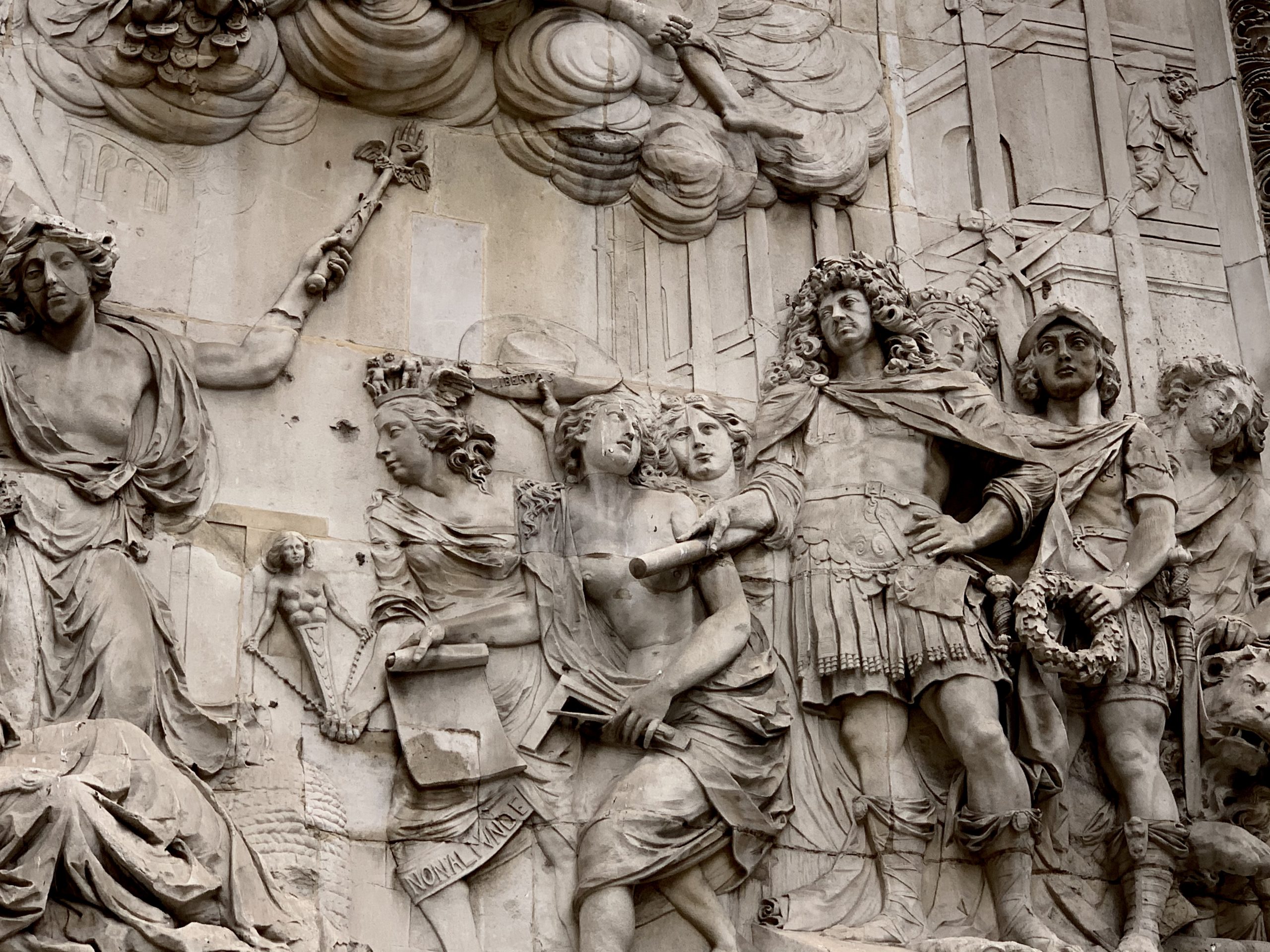 A heroic Charles II in Roman dress depicted on the Monument. Image by @MeetmrLondoner

The fire followed in the wake of other turbulent events and civil war. The City had been struck by plague the year before. Charles II had only recently returned from exile in 1660, following England’s 11 years as a republic under Oliver Cromwell, who had condemned the King’s father, Charles I, to death in 1648.

London’s story has been forged in fire ever since Boudicca burnt the Roman City in 60AD and murdered many of its people. The Blitz of 1940 transformed the City again. Just 11 years after the Great Fire, the Inner Temple was badly damaged in 1677. Whitehall Palace burned down in 1698. It was never re-built. That event seems to symbolise the growing division between a once absolute monarchy and an ever more confident Parliament. 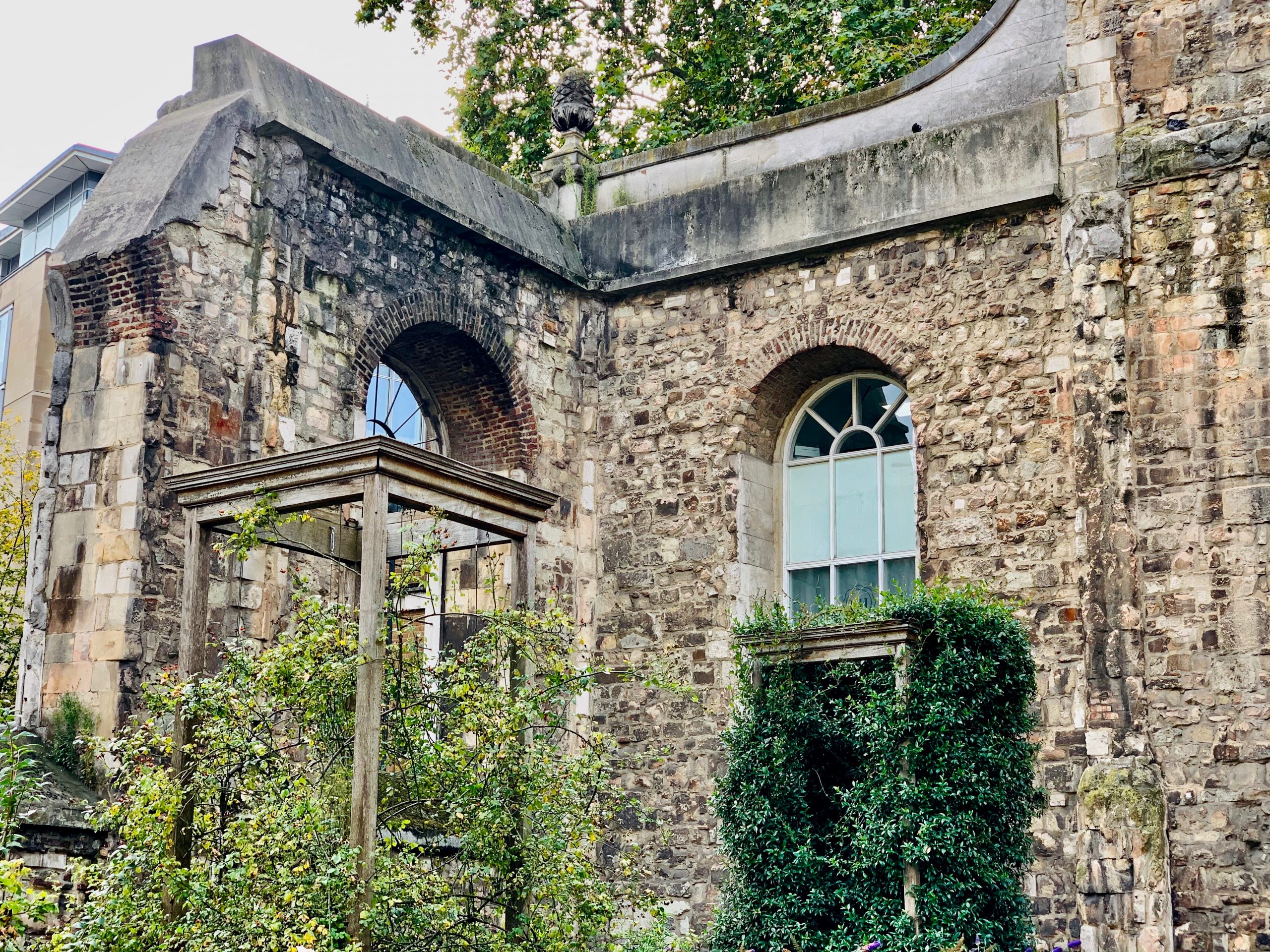 Wren’s Christ Church Greyfriars, built after the Great Fire and lost in the Blitz, is today a small park. Image by @Meetmrlondoner

Some commentators also credit the Great Fire of London with the rise of a new urban consciousness. The city now represented a distinct and more sophisticated way of living as distinct from the countryside of 17th-century countryside and indeed the suburbs of today: that sense of difference is still very much with us.

The fire may not have changed the City in quite the way the history books tell us. But one thing is certain. The Great Fire of London has burned itself into the collective consciousness of Londoners. Today it is part-and-parcel of our folklore, up there with Dick Whittington, the Beefeaters and the second great fire of London – the Blitz.

Mr Londoner is Antony Robbins. He is a former communications director at the Museum of London, UK Charity Commission and aid agency CARE International. You can find him on www.mrlondoner.co.uk or at Instagram@meetmrlondoner