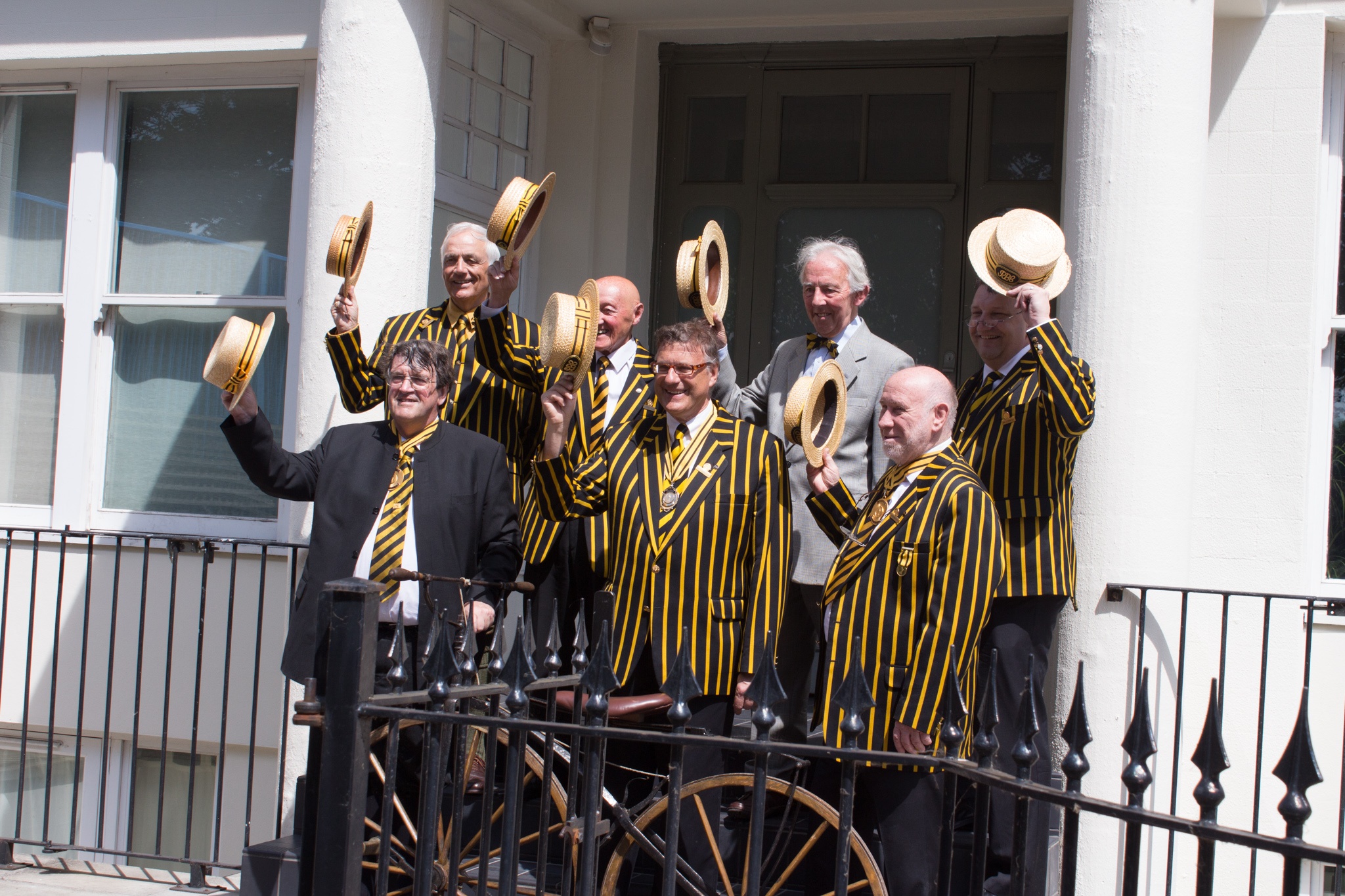 Blue Badge Tourist Guide Mary Sewell is a keen cyclist, as she describes herself. She lives just around the corner from Hackney Downs and loves guiding cycle tours, which has been very popular not only because there is an increasing number of good cycle lanes, but it is also an ideal way to see London in a social distanced way.
But cycling also got her closer to other interesting groups closely connected with the history of Hackney, like the Pickwick Bicycle Club. 150 years ago, on 22 June 1870, 6 cycling enthusiasts met at the Downs Hotel, on Hackney Downs, and decided to form a bicycle club. As Charles Dickens had died earlier that month, on 9 June, they decided to name their club the Pickwick Bicycle Club, in his honour. 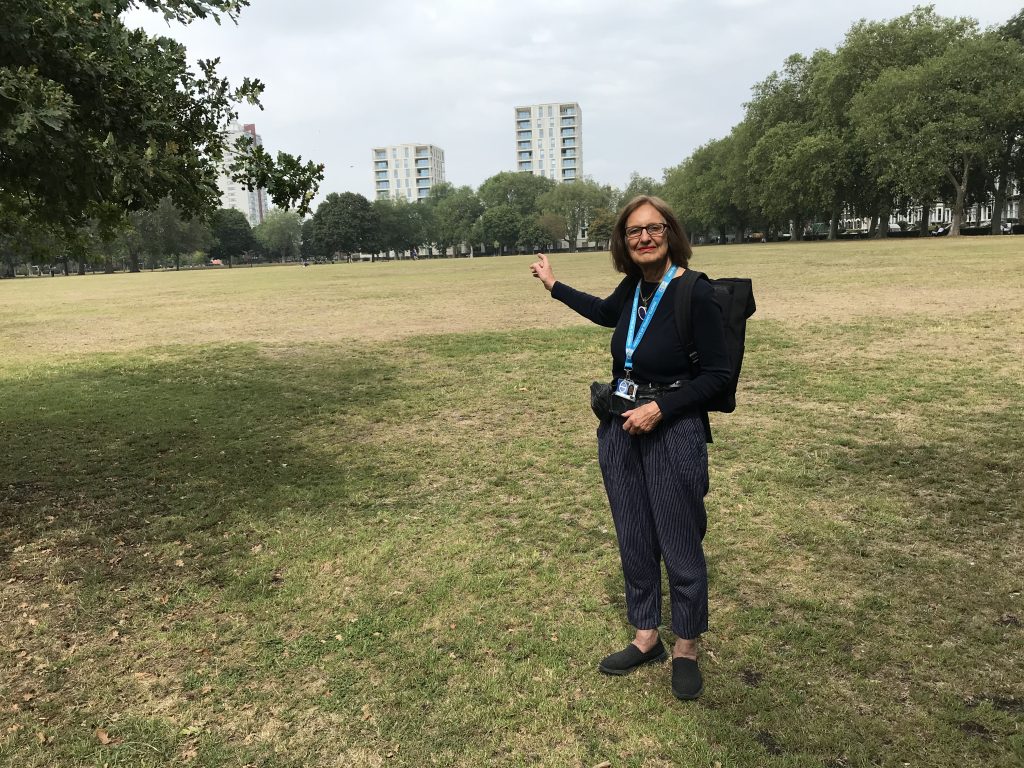 Mary became involved with the club when she noticed that the plaque on the Downs Hotel, commemorating this event, had disappeared when the pub was converted into flats. On 22 June 2014 a new plaque was unveiled. On it it is possible to see that the Pickwick Bicycle Club is the oldest cycling club in the world extant. It is also the world’s oldest Dickensian association. 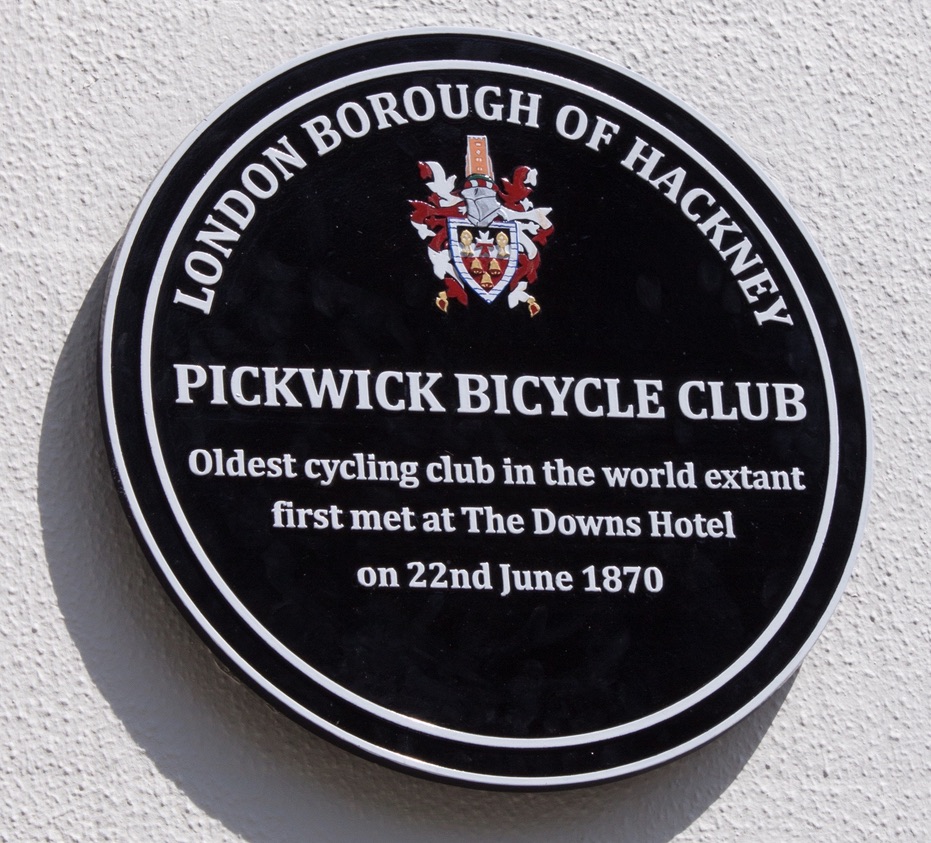 We loved the story, and we asked Mary to take us on a cycling tour around Hackney, as part of the #TourLocal initiative. Here are the fantastic hidden bits of history that she shared with us – and if you want more, we strongly recommend contacting Mary to book one of her cycling tours.

Hackney Downs is an excellent public space. Hackney Carnival, or “Mare de Gras” (Mare St is the name of the local high street) gathers here. The name comes from an interesting play on words of the “Mardi Gras” or “Fat Tuesday, but unlike the original, it does not mark the beginning of Lent, as it happens in the second Sunday of September. Unfortunately due to the pandemic, this year the event is being held online – you can find out more here. But do expect a vibrant dose of colour, feathers and glitter: Hackney carnival has been described as “an exuberant celebration of local creativity and diversity” and even as a secret alternative to Notting Hill Carnival. 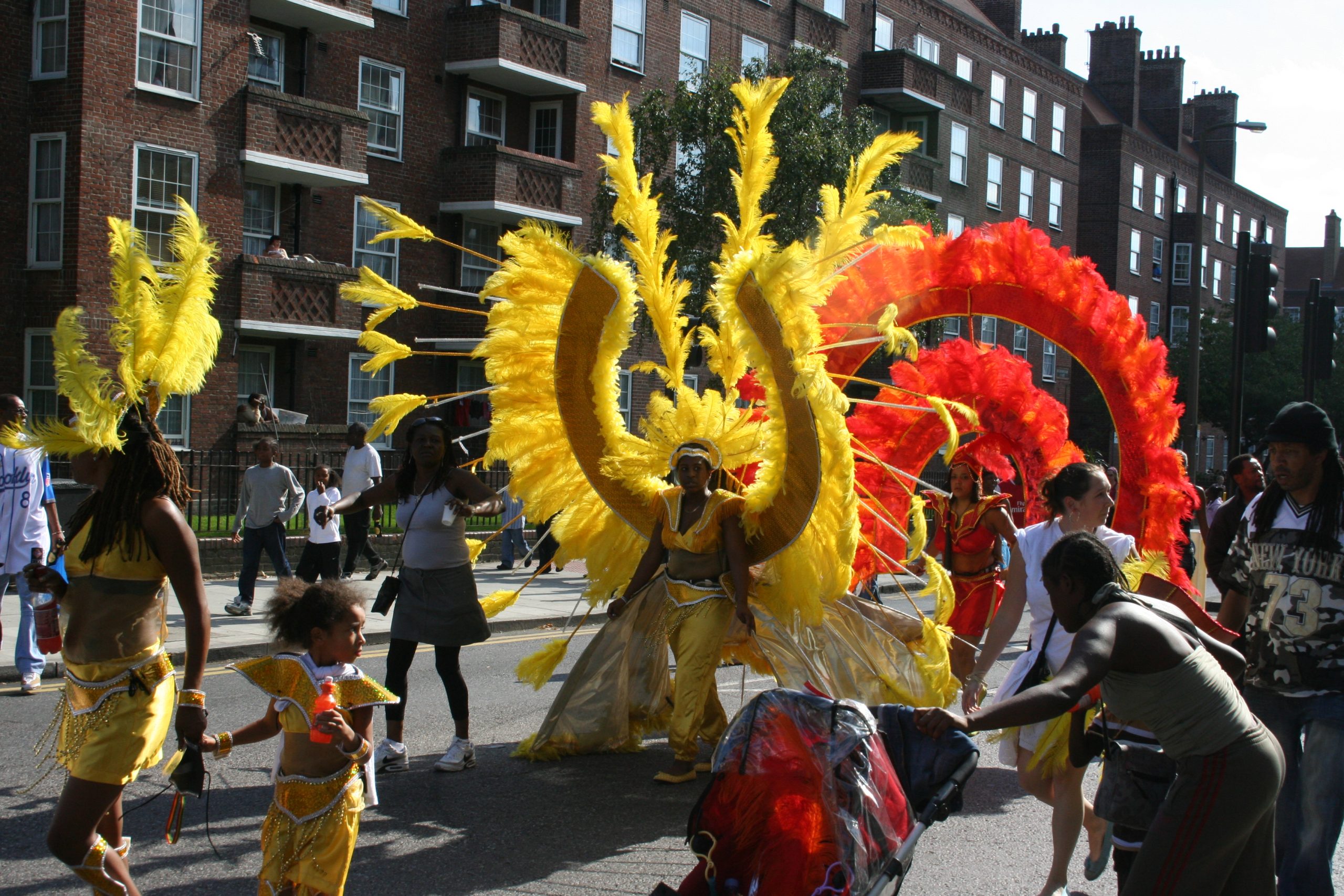 The colours of the Hackney Carnival. Photo: Mary Sewell

On the opposite side of Hackney Downs stands Mossbourne Academy, designed by Lord Richard Rogers. This excellent state academy replaced Hackney Downs school, which was founded by one of the 12 Great City of London livery companies, the Grocers Co. 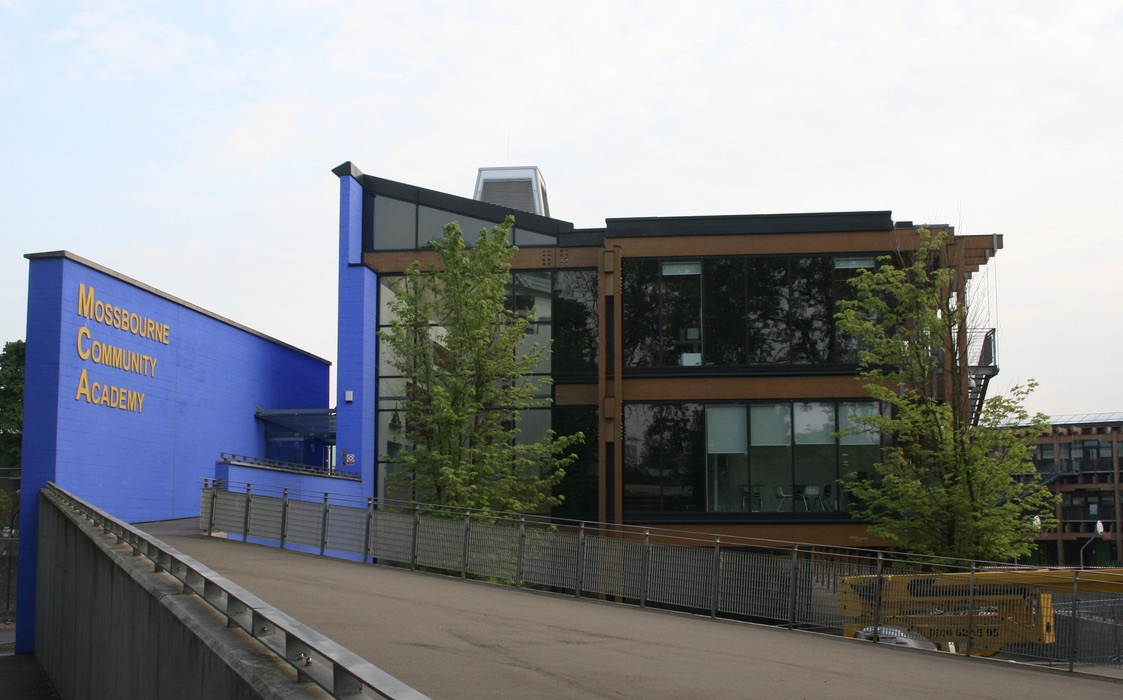 Former pupils include influential playwright and Nobel Prize winner Harold Pinter (1930-2008), who is commemorated by a plaque in nearby Thistlewaite Road, where he was born. 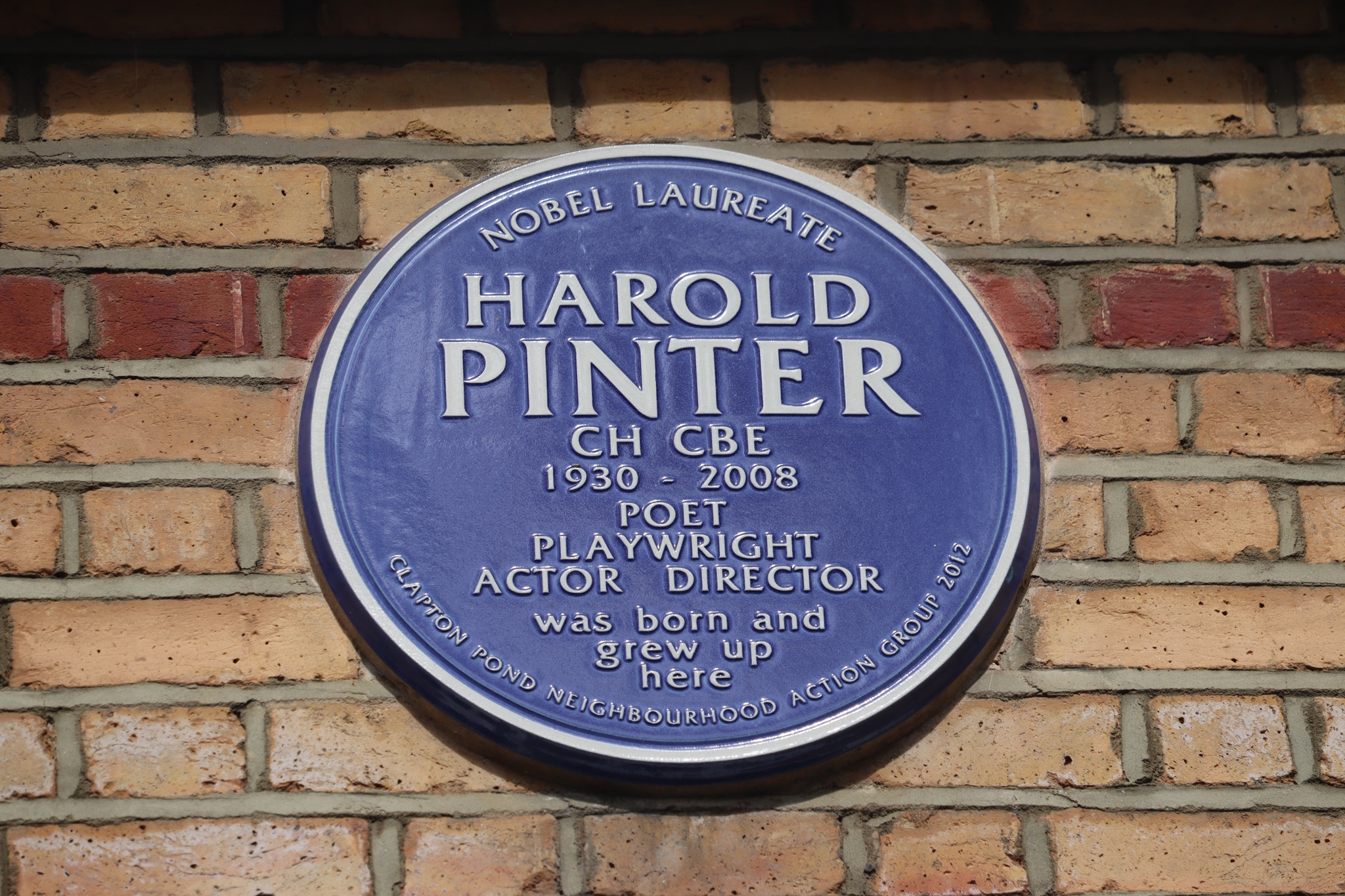 In Tudor times, Hackney, in the fresh air on the downs, less than 3 miles from the City of London, was both pleasant and convenient.

Between the Downs Hotel and Harold Pinter’s house was Brooke House, built around 1409, sadly demolished after WW2 bombing. It is believed that here in 1536 King Henry VIII met and was reconciled with his daughter Mary, whom he had not seen for 5 years and where she signed a document agreeing that she was illegitimate.

Brooke House became an asylum for upper and middle-class people with mental disorders, one of whom was Ann Druitt, whose son was one of the Jack the Ripper suspects. Brooke House was replaced by Brooke House school, attended by successful entrepreneur Lord Alan Sugar. It is now a sixth form college.

One name on the plaque outside is that of Elizabethan courtier, poet and playwright Edward de Vere (1550-1604), 17th Earl of Oxford who, according to some, could have written the plays and poems traditionally attributed to William Shakespeare (1564-1616).

The new Theatre Courtyard Gallery in Shoreditch, South Hackney, which will soon open to the public, will house a permanent exhibition of Shakespearean and Elizabethan artefacts, including some objects found on-site during recent archaeological excavations. The Victoria & Albert Museum is loaning Shakespeare’s First Folio and there will be loans from the Museum of London and National Portrait Gallery. Through a glass panel in the floor, you will see the inner foundation wall of The Theatre, England’s first purpose-built theatre, where Shakespeare acted and “Romeo & Juliet” was first performed. 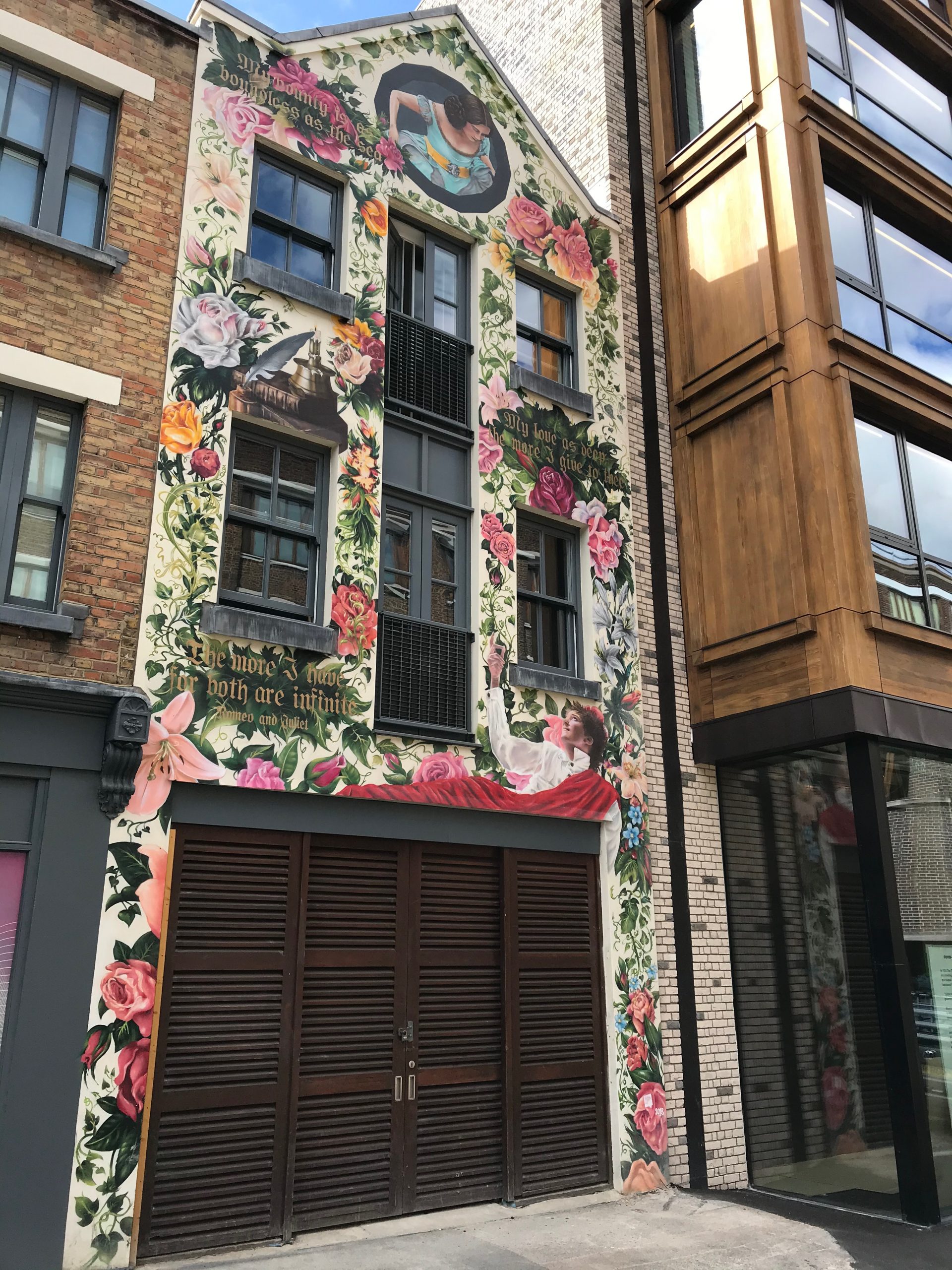 The Theatre. Photo By Mary Sewell

A Tudor house which still stands today and makes a very interesting visit is Sutton House, once known as “The Bryk Place” as it was built in brick, unusual in 16th century. It was thought that the house belonged to Thomas Sutton, who founded Charterhouse school, but it is now thought to have belonged to Henry Sadleir and then his son Sir Ralph Sadleir, who was associated with Thomas Cromwell, Henry VIII and Anne Boleyn. Sutton House, East London’s oldest domestic building, contains fine Tudor panelling. I have a particular affection for Sutton House, as I was married there. 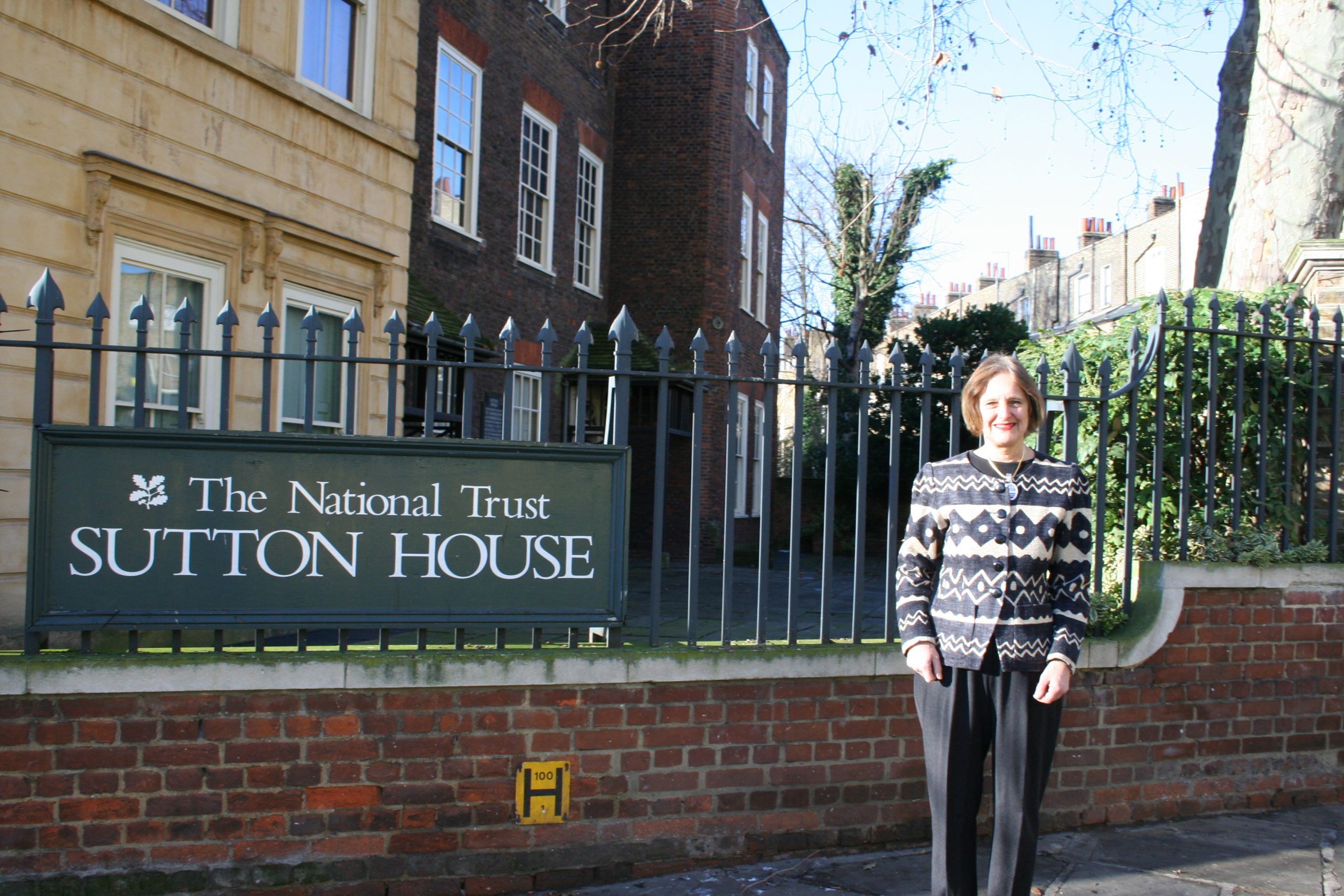 Mary Sewell in front of the Sutton House. Photo by Mary Sewell

On our way there, we pass Mothers Square, once the location of the Salvation Army’s hospital for single mothers, Mothers’ Hospital, which closed in 1986 and was partly replaced by modern housing. The Salvation Army was founded in East London by William Booth and his wife Catherine, who are buried in Abney Park garden cemetery, Stoke Newington, Hackney. Their son Bramwell and several SA commissioners are buried next to them. The cemetery is one of London’s “Magnificent Seven” cemeteries.

St John at Hackney, consecrated in 1797, was built to accommodate a growing congregation. Its churchyard contains several interesting tombs including that of Sir Francis Beaufort, who, in 1805, created the Beaufort Scale, to measure wind strength. Captain John Hunter (1737-1821), 2nd Governor of New South Wales, who gave his name to the Hunter Valley now famous for Australian wine, is buried here.

Other tombs include Conrad Loddiges (1738-1826), who developed the nearby botanic nursery founded by Johann Busch (1730-95) and his family. These horticulturalists were from Hanover, Germany. Wisteria, orchids and palms were all grown at Loddiges nursery. The heated conservatory built by Conrad’s son George inspired his friend Joseph Paxton, who went on to design the Crystal Palace. George used his considerable arboretum experience at Loddiges in his landscape designs for Abney Park cemetery. 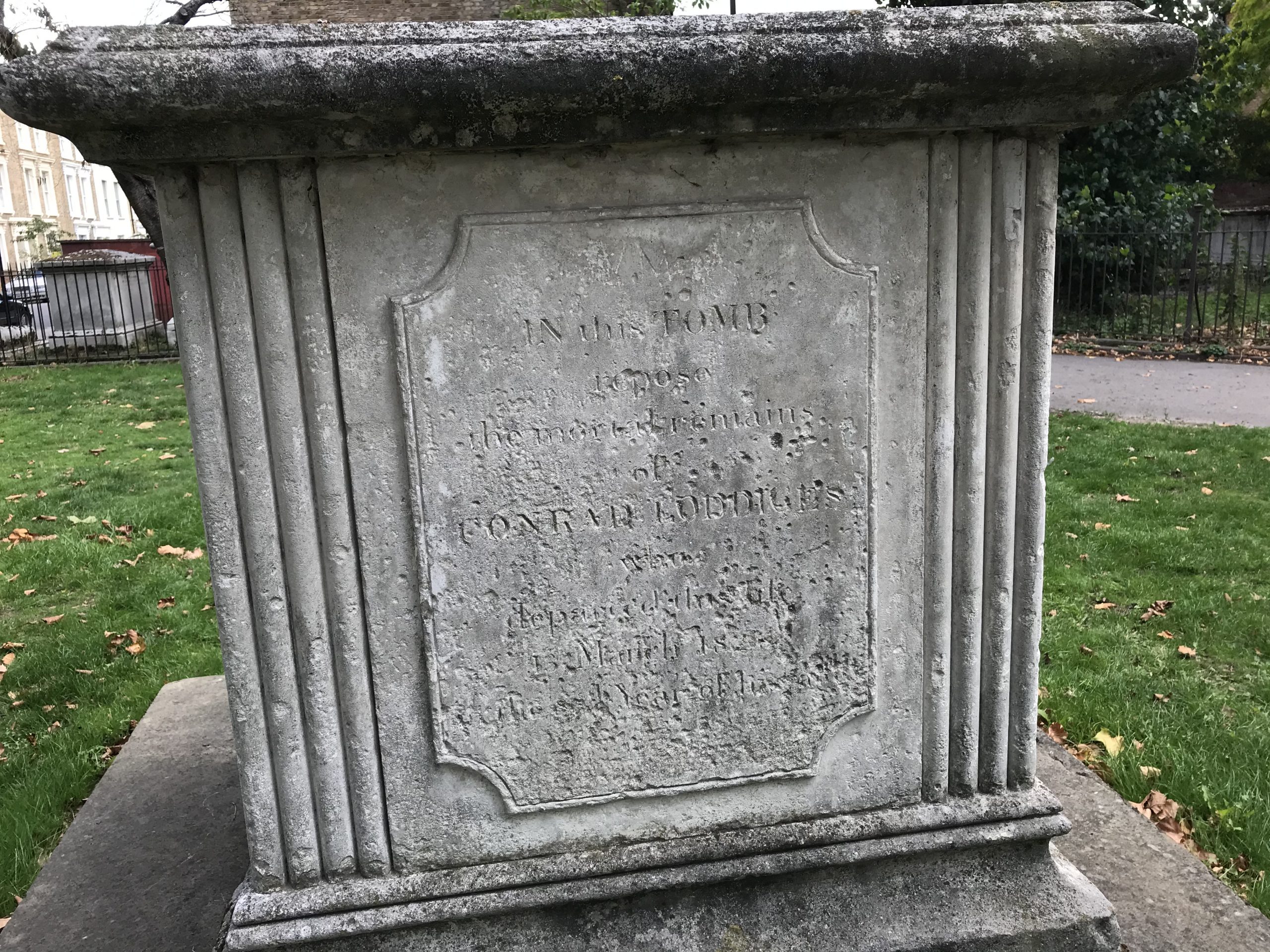 St John’s replaced the smaller, medieval St Augustine’s church, where Edward de Vere is thought to have been buried. The church was demolished but the tower was retained to house the peal of bells. A working, early 17th-century clock still remains on the 3rd storey. Tower visits are organised by the Hackney Historic Buildings Trust.

The Hackney Empire was designed by Frank Matcham, one of the world’s most accomplished and inventive theatre architects, who designed nearly 100 theatres and transformed at least another 50. Charlie Chaplin, Stanley Holloway, Stan Laurel, Marie Lloyd, Lillie Langtry, Max Miller, Liberace, Tony Hancock, Bruce Forsyth, Ben Elton, Harry Enfield, Dawn French, Jennifer Saunders and Lenny Henry are just some of the famous artists who have appeared here. Hackney Empire is famous for Christmas pantomimes, but stages all kind of shows from rap to opera. 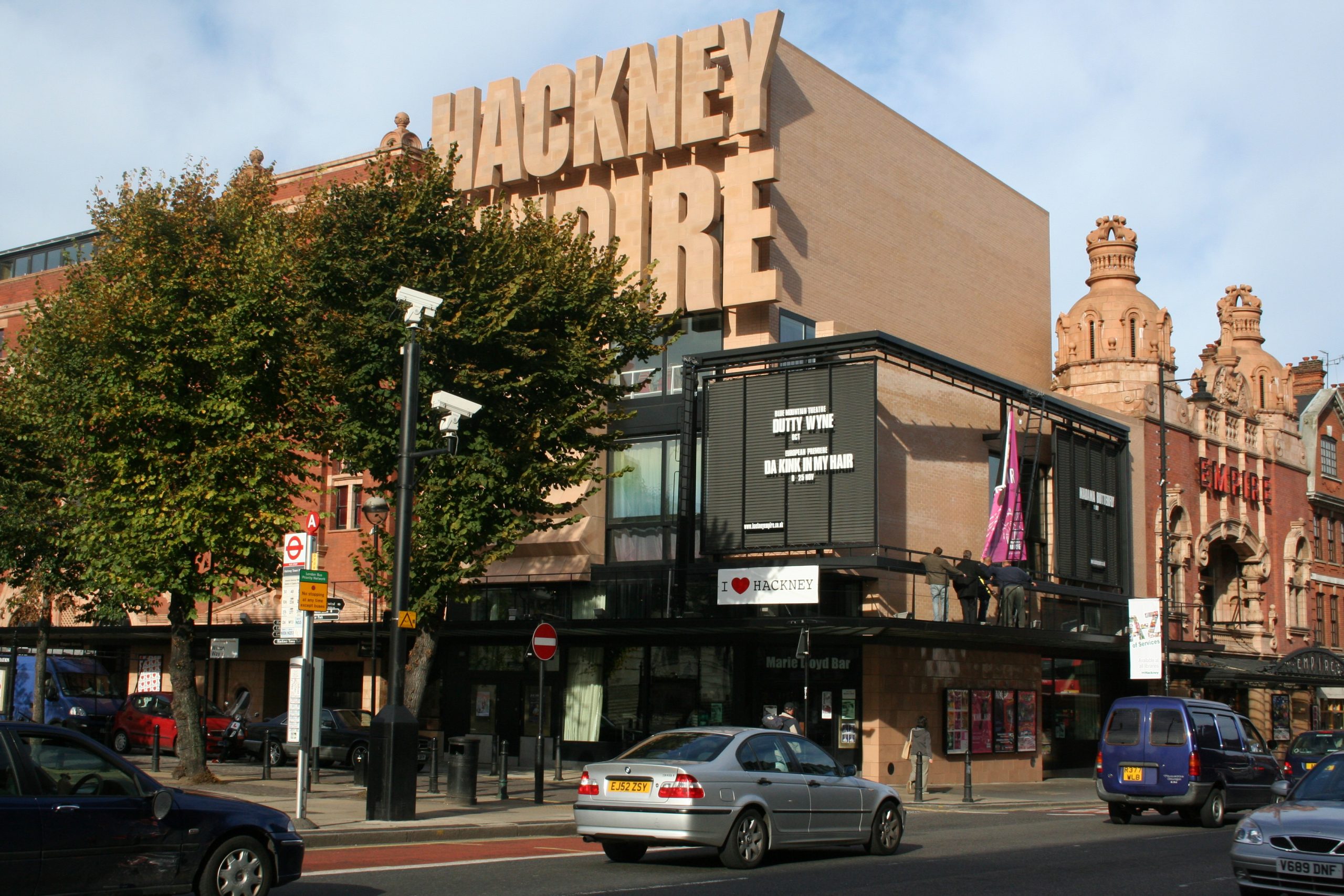 This is just a taste of Hackney. There is much more to explore in Hackney Marshes, along the canals, Stoke Newington, Dalston, London Fields, Haggerston, Hoxton and Shoreditch – parks, museums & galleries, squares (we have the original Eastenders Albert Square), markets, street art, bars and restaurants. 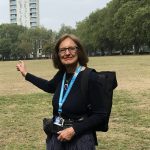 Mary Sewell is a Blue Badge Tourist guide, City of London guide, Clerkenwell & Islington guide and member of the Hackney Society. She specialises in many aspects of East London, also in Parks & Gardens and guides in German and French. Mary is available for walking, cycling, coach and virtual tours www.guidedtours.uk.com. Copyright of all photos is Mary Sewell.