Jimi Hendrix would have been 78 this year. What might the great man have done if he’d lived on? He may well have made films and surely more music. He would probably have curated London’s electric proms and written books, memoirs and poetry. Might he have become an elder statesman of the counter-culture like Leonard Cohen? Or would he perhaps have entered a reclusive period followed by a subsequent chapter of re-birth and re-invention – like David Bowie?

Hendrix died fifty years ago on 18 September 1970 at the Samarkand Hotel, in West London’s Notting Hill. The weeks leading up to his death were mainly spent in Marble Arch at the Cumberland Hotel – the place he called home. His last gig was in Soho’s Ronnie Scott’s, a legendary jazz club – then as now.

Born in in Seattle in 1942, it’s said Hendrix’s musical journey began in 1957 when he acquired an unwanted and rather broken ukulele while working with his father on a series of odd jobs. He spent part of his childhood in Canada. Later he joined the US Army, drafted in for national service, although not entirely by choice. Jimi joined the 101st Airborne Regiment for parachute training in 1961. This came about after he was twice caught in stolen cars. The court service gave him a choice between the army and the young offenders’ institution. Not a brilliant set of options if truth be told.

Jimi managed to have his guitar with him at his base in Kentucky’s Fort Campbell. His fellow trainee paratroopers were wowed by his playing, which they described as a cross between John Lee Hooker and Beethoven. Hendrix was hardly cut out for the military and he wasn’t exactly a brilliant soldier. However, he eventually escaped life in uniform with an honourable discharge – and a lifelong passion for Karate.

Discovered as an emergent musician in New York, Jimi came to London in 1966 at the behest of his well-connected English manager, Chas Chandler. Born Johnny Allen Hendrix, the future star re-christened himself Jimi on the plane over. And his band, The Jimi Hendrix Experience, was born. Within a few days of arrival, Hendrix was on stage at the Regent Street Polytechnic.

Jimi played his first London gig on 25 October 1966 at Scotch of St. James, a rather discreet venue at the end of an alley in Mason’s Yard, Mayfair, just near Savile Row. The club is still there today.

Hendrix was famously photographed in Mason’s Yard, by Gered Mankowitz. Jimi was wearing his Royal Hussars’ cavalry jacket. The picture became iconic. Not surprising: it was a brilliant look, later copied by 1980s dandy highwayman Adam Ant and the moonwalking Michael Jackson.

Jimi loved antique clothes and shopped for much of his peacock gear in the Portobello Road, still famous for its antique market. ’I Was Lord Kitchener’s Valet’, a fashionable stall from 1964 and then a Portobello Road shop from 1967, specialised in selling Victorian militaria. The boutique artfully exploited the 1960s trend for wearing replica uniforms (think Sgt Pepper’s). Both Hendrix and Mick Jagger were photographed wearing its antique jackets. Today, mass-produced clothes of the 1990s are sold as ‘vintage’. Back in the 60s, the kinds of gear that Jimi sought out were exquisitely-made and often over 100 years old.

West London wasn’t the only place Jimi did his shopping. Soho’s Carnaby Street was at the heart of swinging London and its 60s fab scene was captured so affectionately in the Austin Powers movies of the late 1990s. Hendrix loved the area. Shops like ‘Lord John’ and ‘Kleptomania’ both set the pace and forged the trends. They made fashionable clothes for mass consumption in the case of the former – and sold flamboyant vintage pieces in the case of the latter. Hendrix said: “I arrived here with just the suit I stood up in. I’m going back with the best wardrobe of gear that Carnaby Street can offer.” 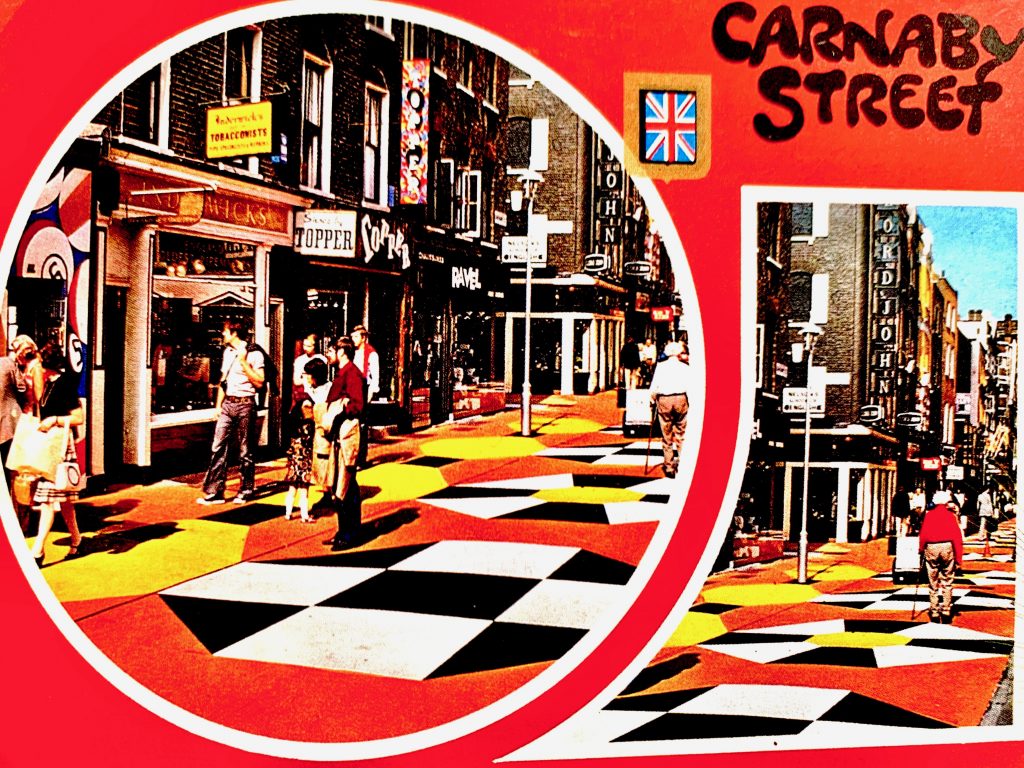 A lurid 1960s postcard produced once Carnaby Street had been placed on the map.

Running parallel to Carnaby Street is Kingly Street. It’s famous for a few musical and film firsts. It was here that the ‘Hand-Jive’ was invented. The dance was famously performed by John Travolta and Olivia Newton-John in the 1977 film Grease. It was the dance of choice in the cramped basement of the Cat’s Whisker, a 1950s skiffle bar, which also hosted London’s first jukebox.

Other clubs followed. The Bag O’ Nails was at number nine Kingly Street. It was here on 15 May 1967 that Paul met Linda McCartney. Mick Jagger, Georgie Fame and Tom Jones loved the place. It was also here that Jimi played one of his very first London gigs. The Bag O’ Nails derives its name from ‘bacchanalian’ after Bacchus – the Roman god of wine, revelry and merriment. The nightclub is today the Court private members’ club. The mosh pits of the 1980s are long gone, replaced with an elegant piano bar.

Success came quickly for Hendrix in London. Hey Joe, Purple Haze and The Wind Cries Mary were all UK hits in 1966. The next year he played the Monterey Pop Festival and famously – and sensationally – performed the Star Spangled Banner at Woodstock in 1969. Hendrix’s sound of overdriven amplifiers, wah-wah guitars and the deliberate incorporation of electronic feedback, were like nothing that had gone before.

Jimi’s story is told at 23-25 Brook Street, at Handel & Hendrix in London in well-appointed Mayfair.  It’s also home to the only Blue plaque commemorating his life in the capital. Kew Gardens on south-west London’s furthest reaches is, on the other hand, an unlikely spot for those following the Hendrix trail. Known as the Fox and Firkin back in the day, Hendrix did a famous photoshoot here in this railway station pub, now called the Tap on the Line. It’s still a comfy hostel owned by the Fuller’s Brewery, which makes reliable British beer on the banks of the Thames, just a few miles away in Chiswick.

Pubs feature quite a bit in the Hendrix story. In Soho, the Ship at 116 Wardour Street, was a popular watering hole for sixties rock stars due to its proximity to the Marquee Club. The Marquee hosted huge acts including the Who and the first-ever performance of the Rolling Stones, in 1962. The popular boozer was badly bombed in the war but emerged Phoenix-like from the ashes. Jimi enjoyed the pub’s ambience and was counted among the regular clientele. The Who’s Keith Moon enjoyed it too but was barred for his famously over-exuberant behaviour. The Clash, who later gave the world London Calling, became regulars a decade later. 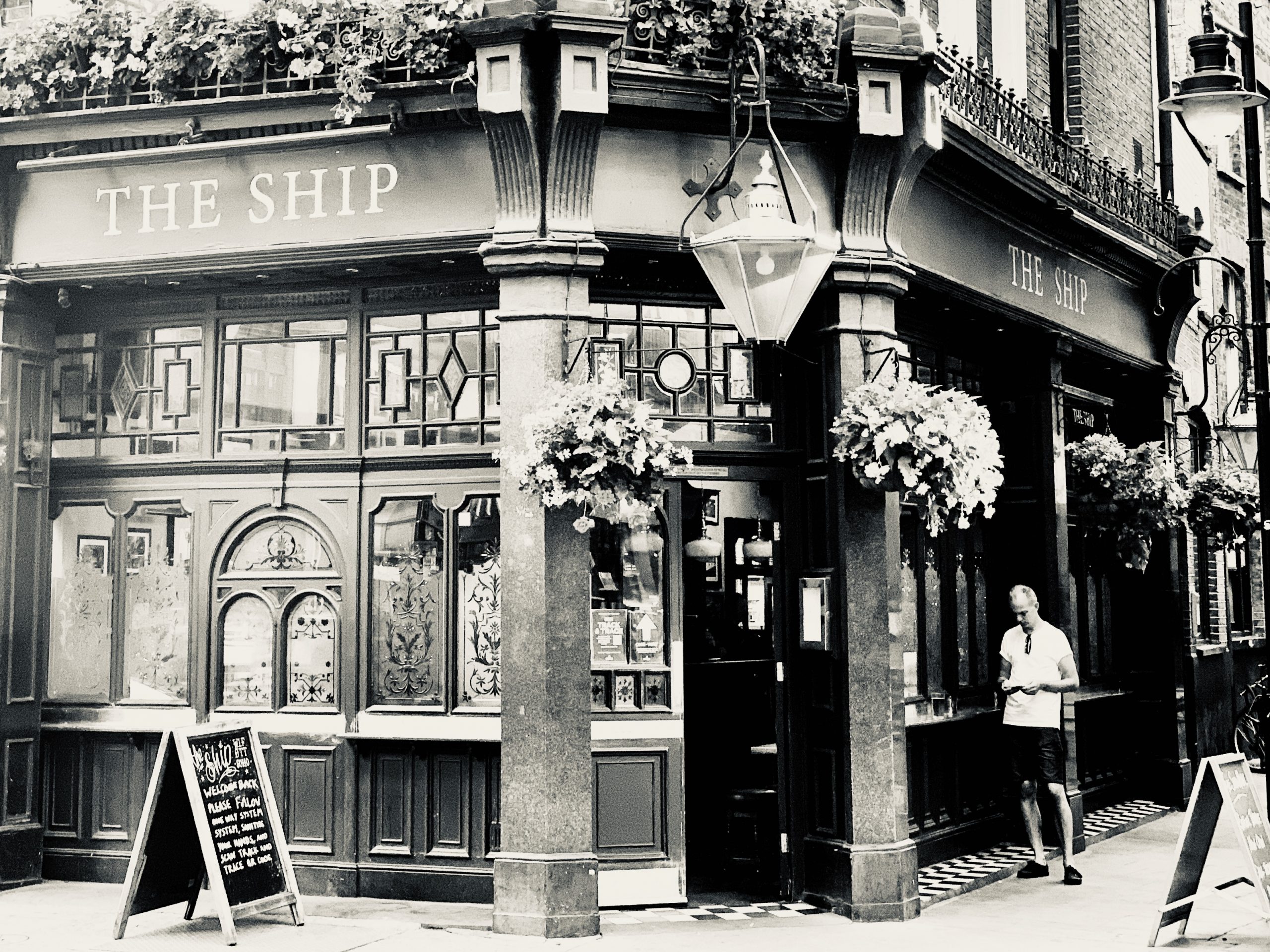 Jimi was a regular at the Ship on Wardour Street. Image: @meetmrlondoner

An early London gig for Jimi was in a pub on the Charing Cross Road, alongside another 60s supergroup, the Cream. The Cream was co-founded by Eric Clapton and the legendarily-wild drummer, Ginger Baker. With Baker what you saw in a performance was pretty much what you got in real life. Hendrix was the opposite. Despite famously smashing his guitar on stage, Jimi Hendrix was a quiet and reflective man, albeit one who wanted to experience everything. He was affable too, but also vulnerable – and possibly quite lonely. He certainly had an addictive personality and – despite everything – could be unpleasant while under the influence.

It’s 50 years since we lost Hendrix. We’ll never know how he would have evolved musically and as a person. Instead, Jimi lived fast and died young like T-Rex’s Marc Bolan, the Mamas and Papas’ Mama Cass and the Who’s Keith Moon – all of whom died in London.

But Jimi Hendrix – with his incredible music, his magnetic appeal and his peacock style – was shaped by 1960s London and indeed shaped 1960s London in return.

Antony Robbins, AKA, Mr Londoner is a broadcaster, writer and former director of the Museum of London.