This autumn marks both the eightieth anniversary of the Battle of Britain and the start of the Blitz – the bombing of industrial and civilian targets across the UK. Mr Londoner, aka Antony Robbins, explores some of the lesser-known aspects of the battle – and its impact on London.

At the heart of our story is Directive No 16. This was Hitler’s plan to mount Operation Sea Lion, the invasion of England from Nazi-occupied France. But first Hitler had to defeat the Royal Air Force. That was Directive No.17. Germany’s airforce – the Luftwaffe – had proved its worth in the blitzkrieg that had torn through the rest of Europe. Its formidable fighting force included Stuka dive bombers, which delivered shock and awe to those on the receiving end, through to nimble fighter planes – the Messerschmitt BF109 and Focke-Wulf Fw190.

But the Luftwaffe had its weaknesses. It competed for resources with the Kriegsmarine – the German navy. Although it operated brilliantly, supporting ground troops, it was less effective fighting over the sea and against a well-defended enemy territory. Its Stuka bombers, the scourge of troops on the ground, were very vulnerable to attack from the air. German fighter planes had sufficient fuel for only twenty minutes flying time over England. If they exceeded this limit, pilots risked ditching in the sea or bailing out over enemy territory.

Knocking the RAF out of the sky was no mean feat. The British had a new secret weapon in radar, championed by Air Vice Marshall Sir Hugh Dowding. The Dowding System became England’s eyes and ears, alerting the RAF to attack formations the moment they were airborne. Dowding – nicknamed ‘Stuffy’ by his men – was a brilliant tactician with no detectable sense of humour. He became, nevertheless, ‘the saviour of the Battle of Britain’.

In addition to Dowding and radar, Britain also had great aircraft. The Supermarine Spitfire – originally called the Shrew but quickly rebranded – was tricky to handle on the ground but wonderfully manoeuvrable in the air. The less-glamorous but more numerous Hawker Hurricane did more of the heavy lifting. This robust fighter could endure more damage than the gazelle-like Spitfire. Unlike German aircraft, however, British planes lacked petrol-injection, which risked the engine being deprived of fuel during tricky manoeuvres.

On the eve of the Battle of Britain in 1940, just under 3,000 Allied pilots prepared to engage the might of the Luftwaffe. They comprised 2,350 men from the UK and the rest from Commonwealth countries including South Africa; Canada; Australia and New Zealand. They were joined by hundreds of men from Czechoslovakia, France and Belgium – and eleven from America.

Over 140 experienced Polish pilots fought in the battle. Sergeant Antoni Glowacki of 501 Squadron RAF, claimed five enemy bombers during three separate combat sorties on 24 August 1940. He was one of only three airmen to achieve Ace-in-a-Day status during the battle. 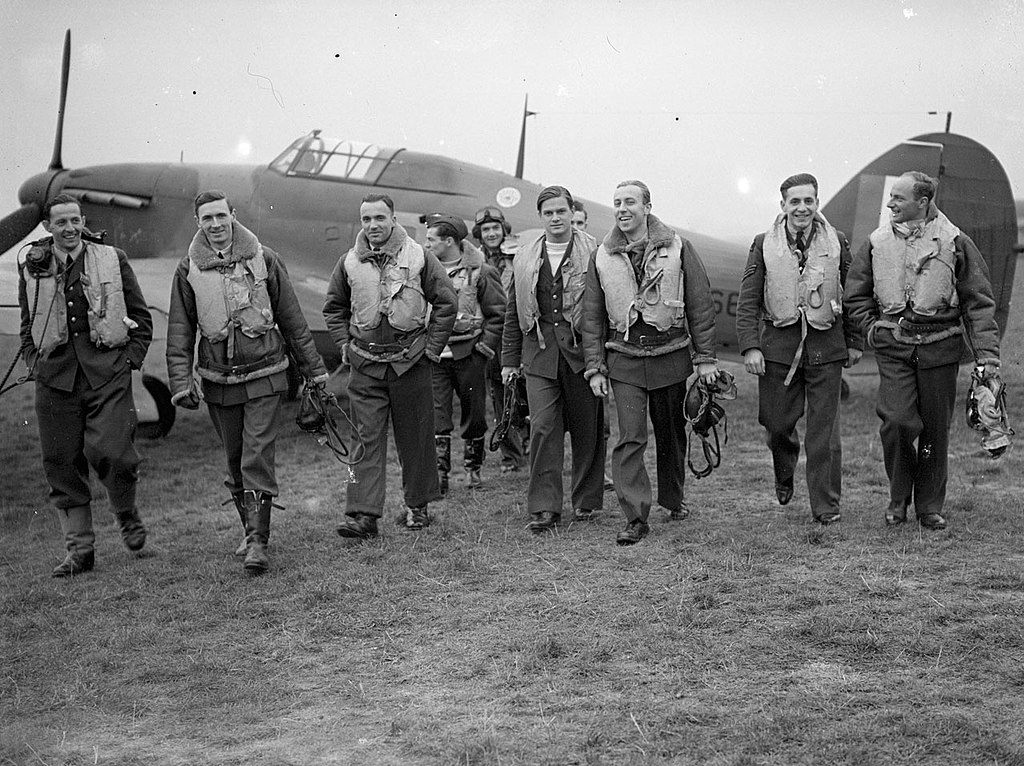 Polish 303 Squadron pilots. Photo by Devon S A, Royal Air Force official photographer. This is a photograph from the collections of the Imperial War Museums. Public Domain

Churchill lionised Battle of Britain pilots in his speech about the Few. But the Few were served by ‘the many’: The fight could not have been taken to the skies without the tireless work of ground crews; engineers; fitters; armourers; flight controllers; firemen; medics and many others – men and women alike. Their story too is told on the 2005 Battle of Britain Monument at Victoria Embankment, created by sculptor Paul Day. 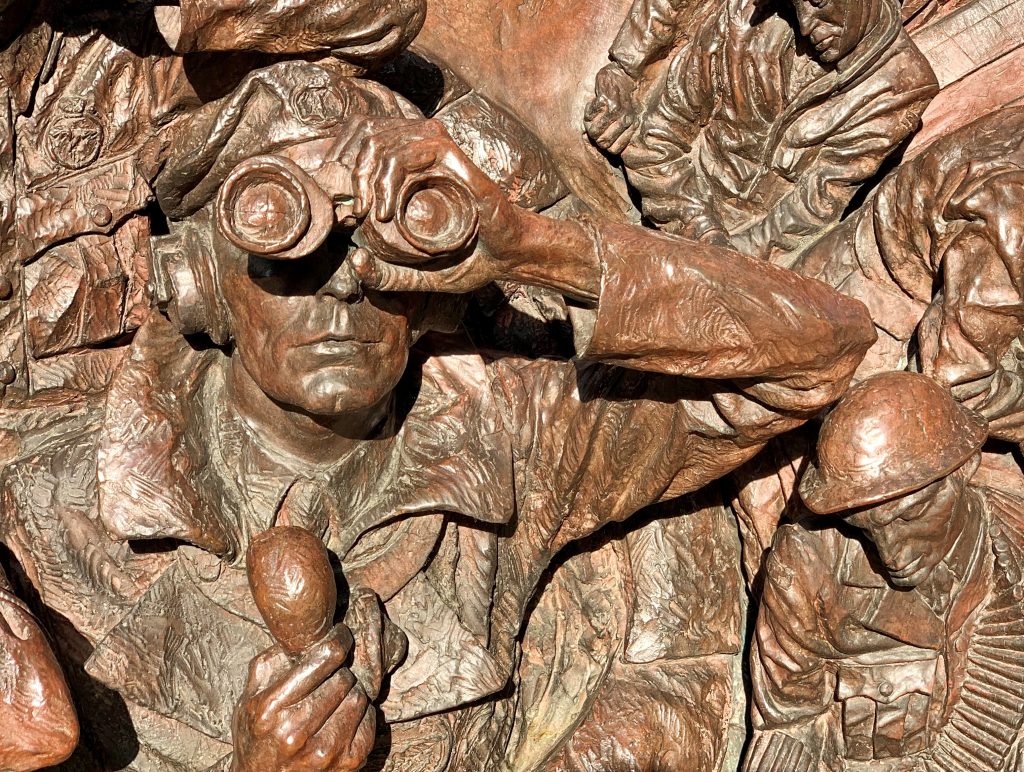 Detail on the Battle of Britain Memorial, by sculptor Paul Day. Image by @MeetMrLondoner

Battle of Britain Day is commemorated on 15 September, the deciding moment in the conflict described by some as ‘the thirteen hours that saved Britain’. That day Germany mounted its largest raid ever, as two waves of bombers were harried all day by British fighters. By that evening the Germans accepted they’d lost the battle. On 17 September Hitler’s invasion plans were abandoned. His attention was turned east, to the Soviet Union, whose vast lands contained the raw materials the Nazis so desperately needed. The world’s first, and largest, air battle was over. It was Hitler’s first defeat. Britain was saved but the blitz had only just begun.

It had been just a week earlier, on 7 September 1940, that the Luftwaffe had made its fatal mistake. It turned its attentions away from British airfields to bomb cities. Plymouth, Coventry, London and others suffered devastating raids. The blitz would cost the lives of 40,000 civilians. The pause in airfield attacks, however, gave RAF Fighter Command time to re-group and re-arm. 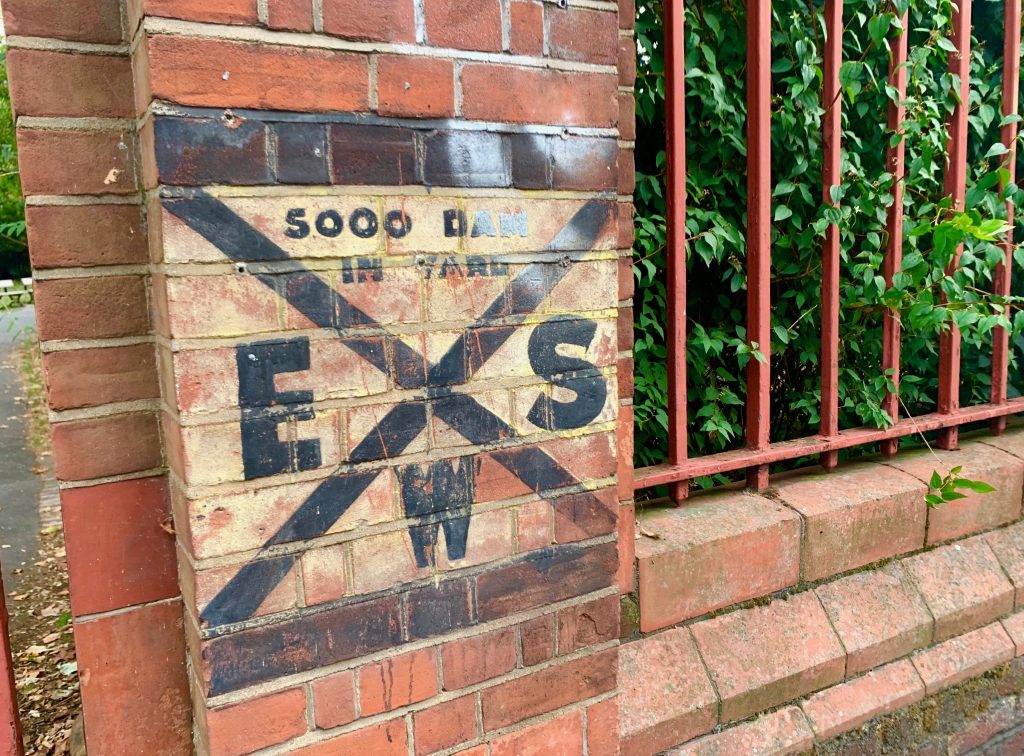 Now, eighty years after the war, there are few bomb sites left in London, unless you know where to look. Cripplegate in the City was razed to the ground and replaced with the Barbican Estate. The carpark opposite the City Road’s famous Eagle pub is still a bombsite. More surprising are the missing floors above the Garlic Shots bar in Soho’s Frith Street, which fell victim to incendiary bombs in 1940. Under the streets of Clapham are huge deep-level shelters, now used to grow micro-vegetables. There are occasional tours.

Look around your own neighbourhood. See the tell-tale gaps in the architecture or walls still supported by wartime steel bracing or wooden shuttering. The RAF church at St Clement Danes was built by Wren in 1682, firebombed in 1940 and re-built in 1958. You can still see its bomb blasted outer north walls. Dowding is commemorated outside the church in a fine 1988 statue by Faith Winter.

The Battle of Britain as portrayed in films and history books often conveys the idea that the nation, with its vast empire, stood completely on its own in 1940. And it was stereotypical upper- class English pilots who alone saved the day. But this doesn’t tell the whole story. In the year that Britain leaves the European Union, it’s timely to remember and to honour the contribution of servicemen and women from across the globe, who helped deliver us from our Darkest Hour.

Antony Robbins, AKA, Mr Londoner is a broadcaster, writer and former director of the Museum of London.